The Ehsaas Relief telethon where the premier raised a decent amount of money to fight the disease, led to a lot of controversies. The telethon featured prominent cleric Maulana Tariq Jameel as well. Together, the duo prayed for ease in these tough times.

Now, a prominent religious scholar Javed Ahmad Ghamidi also shared his views on this important issue. He asked clerics to stop blaming women for natural calamities. He also asked them to look at major sins that are deep-rooted in Pakistani society.

‘Disasters occur as per the law of God’

While giving an interview to journalist Shahzaib Khanzada on his show, Ghamidi commented said pandemics and natural disasters don’t discriminate and occur as per the law of God. Moreover, their phenomenon has nothing to do with a specific gender. 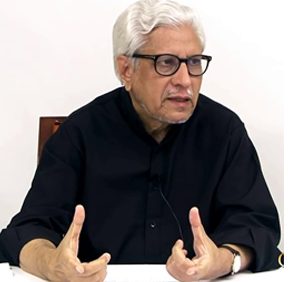 Ghamdi said, “I never understand why we start discussing the clothes of women while talking about the ills of our society. The religious segment ignores the major sins in our society such as adulteration even in medicines, and highlights what women’s deeds.”

Views of activists and politicians on misogyny

Apart from Ghamidi, activists, and politicians also shared their views on Maulana Tariq’s issue. Many demanded that he should apologize to the women for his statement. Recently, Human Rights Minister Shireen Mazari, through her official twitter account, shared her views on this important issue. Mazari termed the misogynistic and ignorant comments blaming women for COVID-19 as unacceptable.

Simply absurd 4 anyone under any guise to even suggest the COVID19 pandemic is a result of women wearing short sleeves or bec of private schools/universities misleading the youth.This simply reflects either ignorance abt pandemics or a misogynist mindset. Absolutely unacceptable.

The Human Rights Commission of Pakistan (HRCP) also took exception to the clerics’ comments and said, “HRCP is appalled at Maulana Tariq Jameel’s recent statement inexplicably correlating women’s modesty to the coronavirus pandemic. Such blatant objectification is unacceptable and when aired on a public television it only compounds the misogyny entrenched in society.”

HRCP is appalled at Maulana #TariqJamil's recent statement inexplicably correlating women's 'modesty' to the #Covid19 pandemic. Such blatant objectification is unacceptable and, when aired on public television, only compounds the misogyny entrenched in society.

As a result of the media uproar, Maulana Tariq Jameel apologized on Twitter. The religious cleric apologized to all that were offended by his comments, including women.

Recently I made some comments that I wish to clarify
My aim was to point out that WE are all to blame for our current state. It was meant to be a general remark not targeting any specific men, women, persons or gender, but as a reminder to get closer to what Allah teaches us.

Maulana Tariq Jameel’s apology showed that he has a heart of gold, enough to forgive or seek forgiveness. For years, he has taught and preached patience and morality to our society. Finally, it seems like this issue should die down and should be forgotten sooner rather than later.