The ongoing chaotic conflict between America and Iran escalated quickly after the recent killing of Qasem Soleimani. While the world is in turmoil, recently, a famous American comedian tried to cool off the atmosphere with a ‘bounty joke’. Apparently, Comic George Lopez’s insensitive comment on Iran’s rumored bounty news landed him in hot waters.

After the mourning period of Major General Qasem Soleiamani ended, Iran has issued stern warnings for the US. Earlier this week, Iran has even raised the red flag of war implying revenge on the death of its military personnel against the US.

Check out what the comic wrote on the post! 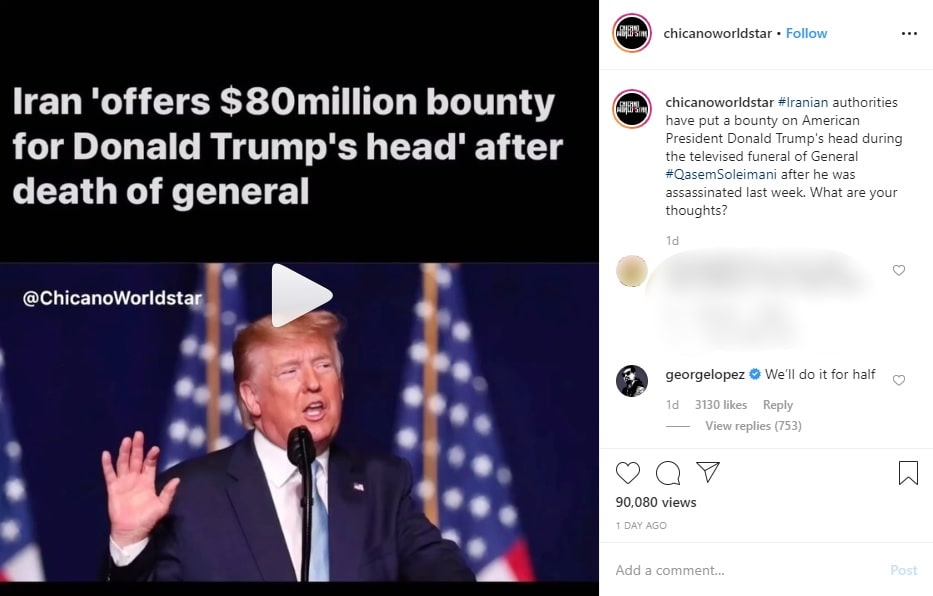 ”[Iranian] authorities have put a bounty on American President Donald Trump’s head during the televised funeral of General, after he was assassinated last week. What are your thoughts?”

Not confirmed yet, but rumors suggest that Iran has put an $80 million bounty prize for whoever brings Trump’s head first. Well, who would have expected that a comment can get America’s intelligence agencies involved? But it sure did for George Lopez. With his hateful opinion, the comedian responded to the post with ”We’ll do it for half” and the netizens completely lost it.

”This is not funny!”

Shit talking the POTUS is one thing, but saying that you want assassinate the President is the most foul thing any person would say. This is not funny.

”You deserve to be arrested!”

If you say you will kill the President of the United States simply because you don’t like him, that is not a joking matter and you deserve to be arrested. @SecretService #ArrestGeorgeLopez https://t.co/mPs6YBXYPm

”This time you landed face down in a pile of crap!”

#ArrestGeorgeLopez I believe I am done with @georgelopez You have done jumped the shark to many times. This time you landed face down in a pile of crap. You dont get a free pass this time. https://t.co/IVF8T41x3v

And the law arrives!

”He needs to be detained and slammed with jail time!”

He needs to be detained and slammed with jail time. I want to see him picking up trash on the side of the road in uniform. Lawyer up buddy! And where the hell is twitter jail? #arrestgeorgelopez

Certainly, the fiery responses on social media clearly show the frustration and anger of people with the comedian. Eventually, George’s take on the bounty news not only infuriated Americans but violated Instagram’s privacy guidelines as well. As per media reports, a Facebook spokesperson assured that the ‘triggering’ comment will be removed shortly.

Since the US-Iran conflict is affecting several other states as well, including Pakistan, the government recently came up with a decision. Reportedly, Foreign Minister Shah Mehmood Qureshi said, ”Pakistan will not be a party to US-Iran conflict”. The crucial decision came up during the official senate meeting happened earlier this week.

What do you think of George Lopez’s comment? Let us know in the comments section below!