In recent times, the escalating security conditions of Pakistan have become an intense issue for the incumbent government. Certainly, the extension of Chief of Army Staff (COAS) General Qamar Javed Bajwa’s service tenure has stirred a debate among the masses. However, recently, COAS General Qamar Javed Bajwa visited the Pakistan Air Force (PAF) Mushaf base in Sargodha.

COAS General Qamar Javed Bajwa flies an F-16 on his visit to Mushaf Base in Sargodha!

Apparently, the exceptional skill set of the Pakistan Armed Forces needs no introduction when it comes to ‘flying’ fighter jets. Despite the heated ties between Pakistan and India, the PAF, in October, escorted an Indian flight after it entered into Pakistan’s airspace. This week, on Monday, COAS General Bajwa flew an F-16 fighter jet along with his companion while visiting the Mushaf Base in Sargodha.

COAS & CAS visited PAF Base Mushaf. COAS was flown in an F-16. CAS flew in another F-16 & both aircraft proceeded to maneuver for a combat action simulation mission.
COAS lauded professionalism & dedication of PAF & thanked the Force for its unmatched services to the nation.1/2 pic.twitter.com/rLjGhMLeCN

“COAS lauded professionalism & dedication of PAF & thanked the Force for its unmatched services to the nation” it further read. According to media reports, during the visit, COAS General Qamar Javed Bajwa flew an F-16 while the CAS was in an American fighter jet. Reportedly, Chief of Air Staff (CAS), Air Chief Marshal Mujahid Anwer Khan accompanied the COAS in another American made fighter jet.

The purpose of the visit was to maneuver for a combat action simulation mission at the Mushaf base of Pakistan Air Force (PAF). Regarding the official visit, a press release was later issued by ISPR carrying details of the action simulation mission. However, after the Army Chiefs arrived at the Sargodha base, they interacted with the squadrons and appreciated their esteemed efforts. 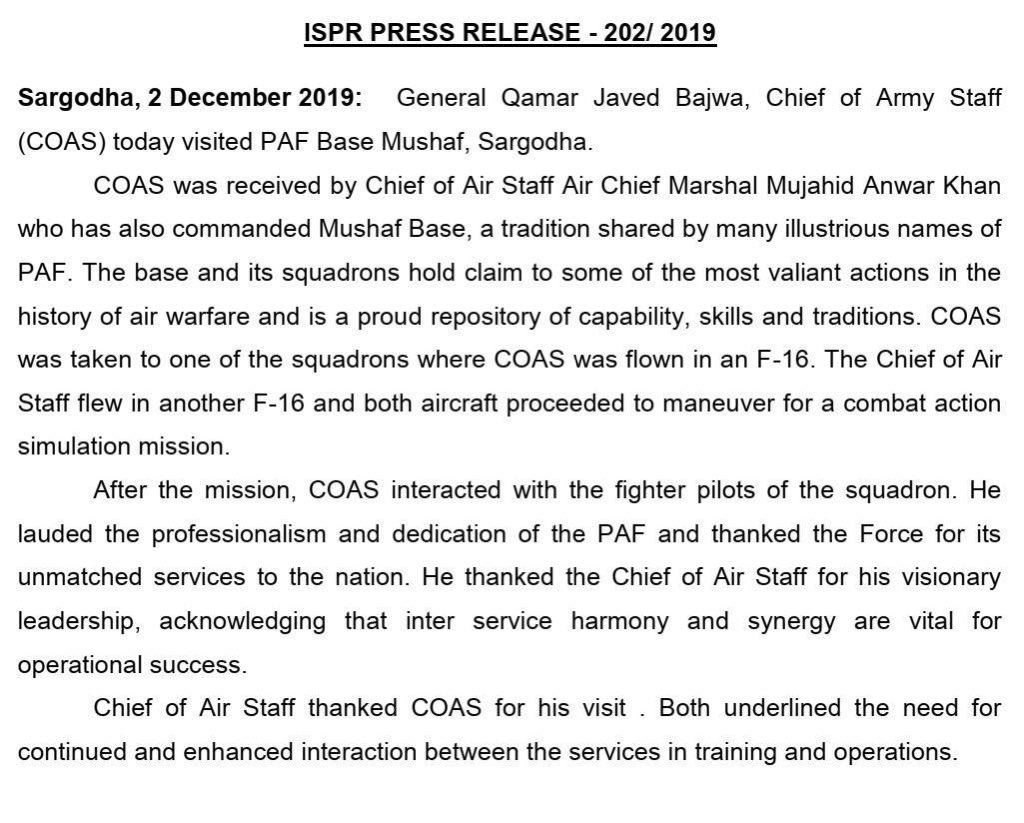 Well, the meetup session happened after COAS along with the CAS completed the mission and returned back to the base. Moreover, General Qamar Bajwa praised the dedication and professionalism of the Pakistan Air Force. Speaking of the services, the COAS thanked the force for the skillful and effectively unmatched services provided to the nation at needed times.

A Mother Guns Down Her Son’s Killer After He Was Set Free By LHC!
Woman Who Mistreated Traffic Police In Karachi Justifies Her Act!
To Top