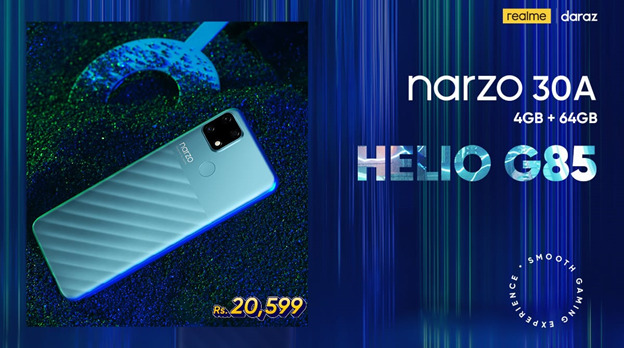 Mobile gaming is a new trend. Everyone you know is a game fanatic these days. Many mobile phone brands have been working to provide gaming smartphones to attract the relevant audience. The young and trendsetting smartphone brand, realme understands its young customers well and hence brings a treat for its fans. With the “Dare to Leap” vision the brand launched its Narzo 30A in Pakistan. The phone has become an instant hit and everyone’s favorite gaming partner.

Narzo series is globally known as realme’s “performance series” with three already existing models, realme Narzo, Narzo 20, and Narzo 20 pro. The latest successor from the series, Narzo 30A is the first Narzo phone to land in Pakistan. The phone supports a powerful MediaTek Helio G85 processor, a 6000mAh Mega battery, and 6GB RAM + 64GB Storage capacity. It Supports Reverse Charging, has a 16.5cm Display, and other amazing features to support smooth gameplay.

Apart from a powerful processor, the 6000mAh battery gives a prolonged gaming experience making it the best gaming phone. realme Narzo 30A fulfills all the requirements of mobile gamers in Pakistan. the phone does not slow down while playing, get stuck, or even heat up while playing. The sleek stylish design of the phone is easy to carry and user-friendly, making it easier to flaunt your new phone. Moreover, realme is conducting a massive, fun-filled, and competitive online gaming event. Multiple teams will face a Battle Royale to win PKR 400,000 grand prize. There is a simple registration process and everyone can participate in the competition.

With these exciting features and competition, let’s make gaming more fun with Narzo 30A.

Agueroooo!-No One Can Forget That, Sergio Aguero Thank You
US Company Produces ‘Satan Shoes’ That Contains A Drop Of ‘Human Blood’ In The Sole
To Top