There were rumours about the shortage of fuel supply in Karachi on Wednesday. It caused a massive uproar among Karachiites. Long queues of vehicles were formed outside gas stations as panicked people rushed to get their vehicles filled up.

However, the state-run Pakistan State Oil (PSO) insisted that it has ample stock available of fuel and that there is no need for people to panic. 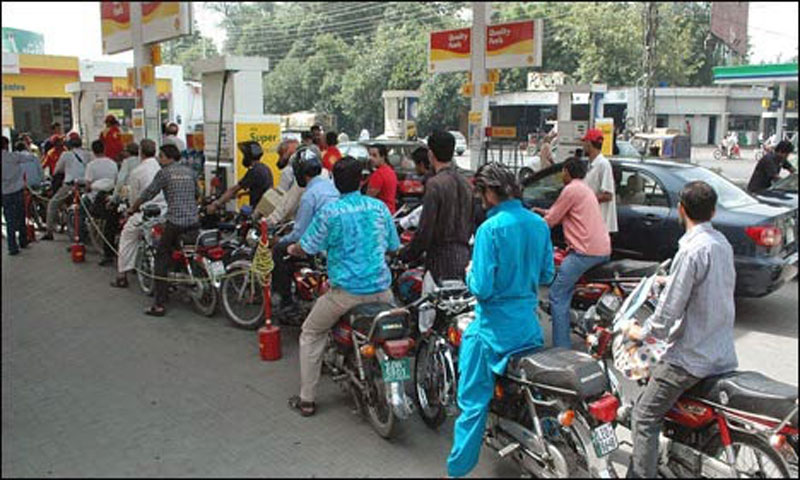 PSO spokesperson Imran Rana said, “We have enough stocks available and there is absolutely no issue of fuel supply“. “We will not let Karachi dry. Every consumer will get the fuel,” he added.

A Shell official also confirmed that they had opened their terminal on Wednesday and there is no disturbance in the supply chain. On the other hand, Total, as well as PSO stations are also operating as per normal routine.

The fuel stations were temporarily closed due to toxic gas leak in Keamari area. But, oil companies have later clarified that the availability and supply chain of fuel is not affected by the gas leak incident.

Furthermore, an oil marketing company is claiming that pumps will get a refill by today. It resumed supplies from its Keamari storage installations on Wednesday afternoon.

Therefore, despite clarification from the oil companies, some people are still facing a problem regarding the availability of fuel. Reportedly, some filling stations are providing petrol in limited quantity to the motorcyclists. There are also reports that some petrol stations took advantage of the situation and are selling the fuel at higher prices.

People rushed to various petrol pumps in Karachi, after the rumours of petroleum supplies’ suspension surfaced on Wednesday night.

Moreover, almost all the major oil marketing companies have their major oil storage capacities at Keamari. All those oil producers hit by a mysterious gas leak on Sunday resulting in the death of at least 14 people. In the wake of the current situation, companies have removed their employees from Keamari area. Moreover, they also shut down their operations for the brief period which started rumours about fuel shortage.

Propaganda to stop PSL 5 in Karachi

However, soon after rumours started to float on social media, people took the opportunity to bash the government. While few many feel that it is a propaganda to stop PSL 5 in Karachi.

JUST IN: Panic among the Karachiites resulted in higher demand & a number of gas stations ran out of stock in #Karachi – Officials of the Fuel Pumps Association say they expect the situation to ease up by Tomorrow – There was no shortage of fuel supply, PSO said.#KarachiGasLeak pic.twitter.com/kqKZtfCbUc

Another mafia in action in Karachi to create hurdles for PMIK when we are having PSL started. Fuel supply to the pumps is suspended. Many fuel pumps are closed. Which are open selling petrol @160/200 . Heard that fuel tankers have gone on strike

Its Been more than an two hours that i have been in a Refueling Que.
Changed two Pumps, Everything they ran out of Fuel. #Karachi #PetrolShortage #KarachiGasLeak pic.twitter.com/oGkZlgkXh6

RAW is 100% involved behind the sudden fuel crisis all over Karachi. These Sheikh-us-Shaitaan Indians are trying their best to sabotage PSL5 Opening Ceremony tomorrow! #PSL5 #Karachi #FuelCrisis pic.twitter.com/1lcqQIvT7O

Infinix & Shadab Khan Collaborate To Bring Surreal Discounts On S5!
Umer Akmal Suspended Over Misconduct By PCB From All Formats!
To Top