Viral ‘Friendship Guy’ Asif Returns To The Internet Flaunting A Bracelet Given By His New Indian Best Friend!

In this cruel world, lucky are those who can have a stable and loyal friend, standing side by side at times of need. Now, when the world is merely based on the information collected from the internet, digital commemorate sometimes result in keeping the popular stakes high. Time to time, the change in trends and viral proportions turns out making an average human being a social media star, overnight.

Since the evolution of the most hysteric stance ‘memes’ taking over the internet, the digital world has seen a flourishing stage. One can never apprehend what’s about to come next as the vast social platforms are filled with humorous sense. Recently, A 9th grader from Sahiwal scored 41 marks in exams and his friends threw him a party. Similarly, leaping over to the ‘friendship meme’ instantly getting onto everyone’s nerves back in 2015, the friendship guru has returned again flaunting his new Indian best friend Akshay from the United States of America (USA).

Going by the name Muhammad Asif Raza on Facebook, the viral friendship guy Asif announced his new ‘international Indian friend’ from the US! 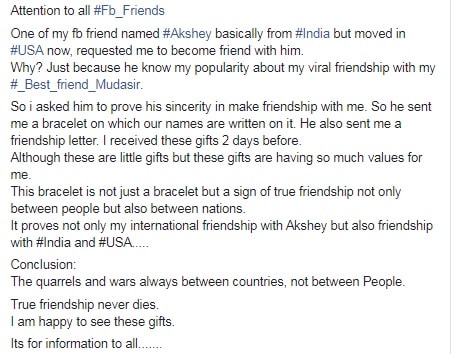 According to Asif, Akshay approached him after his ‘friendship ending’ picture went severely viral on social media four years back. To prove his sincerity to Asif, Akshay sent these bead bracelets as a proof. Not only Asif wrote an amazing post but even attached the pictures of bracelets Akshay sent to him as a friendship gift. To make the bond more strong, Akshay had embossed ‘Asif and Akshay’ on the friendship band along with a heartwarming handwritten letter.

Here’s the bracelet that was flaunted by Asif on his Facebook! 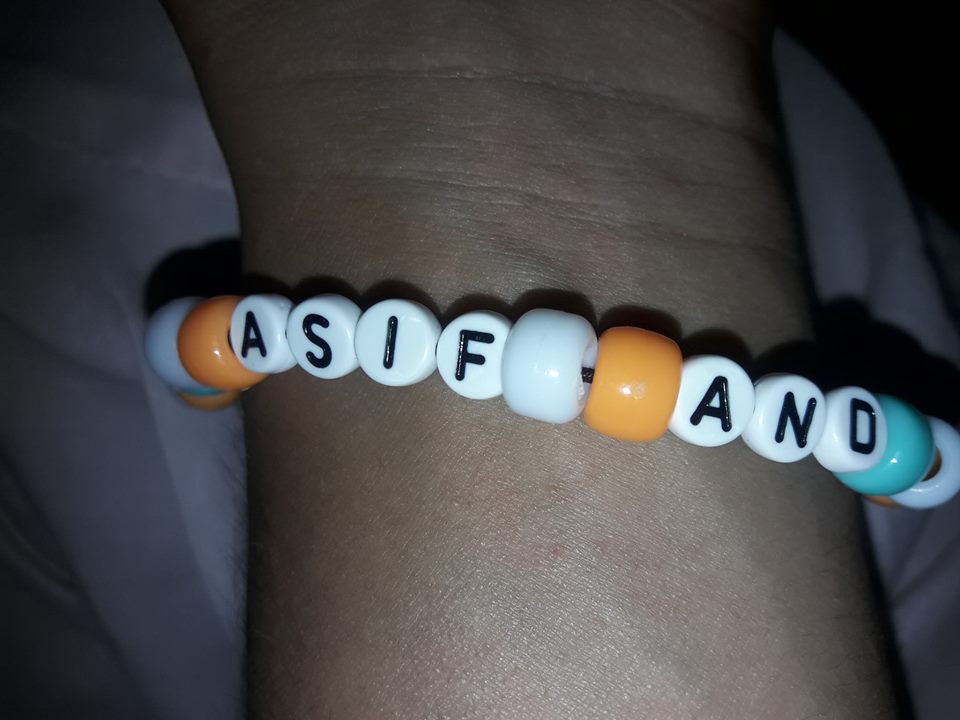 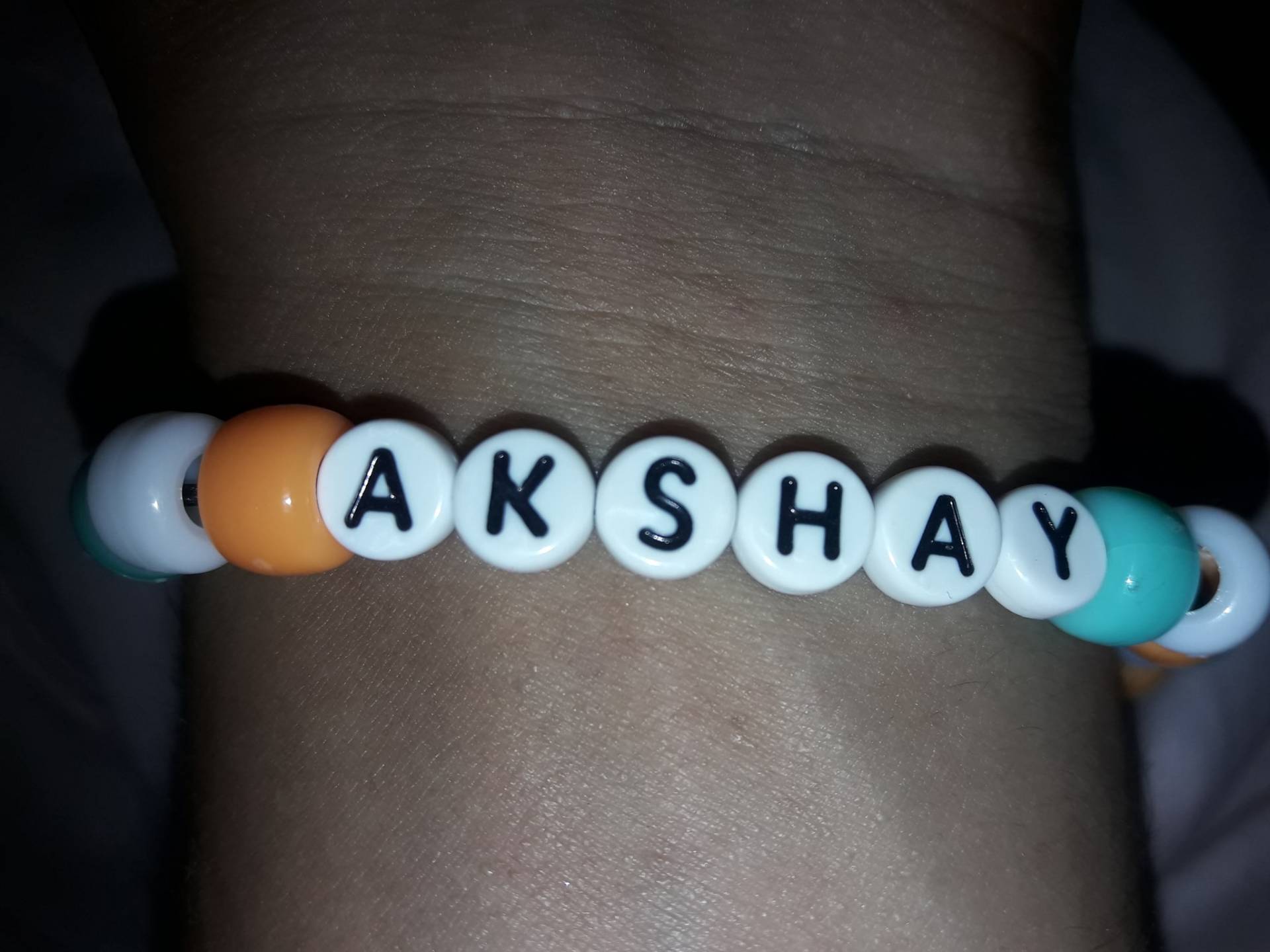 This is what Akshay’s letter said: “Dear Asif, this bracelet represents the resilience of our friendship, despite the oceans and continents between us. Despite our antithetical and conflicting cultures, this bracelet is a testament to the strength and connections between people from different backgrounds. Let this bracelet show that true friendship prevails over centuries worth of conflicts. Let this bracelet not only be symbolic of the relationship between humans but also that between nations such as India and Pakistan or the US and Pakistan.”

It is with these thoughts that I declare this bracelet to be a beacon of hope for international peace, cooperation and love. The whole world has followed the troubles you had to endear with proudy people in your life. We sit somberly on our living room couches as you declared the end of your friendship with Mudasir. Our hearts sang and rejoiced as the two of you were able to regain your friendship.” he added.

Further, he wrote, “Your well-deserved internet popularity came not from a place of spite or ridicule, but from a place of understanding that we too have had bad friendships that have faltered and intensified over time. For we too have had to deal with hubristic and arrogant people who we once called friends. We, the thousands of internet strangers, understand what you went through and are astonished by how brilliantly you dealt with it.

The letter ended with, “Even though, we live in different parts of the world, the internet allows us to unify in ways we were unable to before, that my friend is the magic of friendship. I hope you cherish and enjoy the bracelet for these reasons. I leave you with an Urdu phrase badly translated through Google. Nevertheless, I hope you enjoy it.”

This is the picture of the lovely letter Asif received with the bracelet! 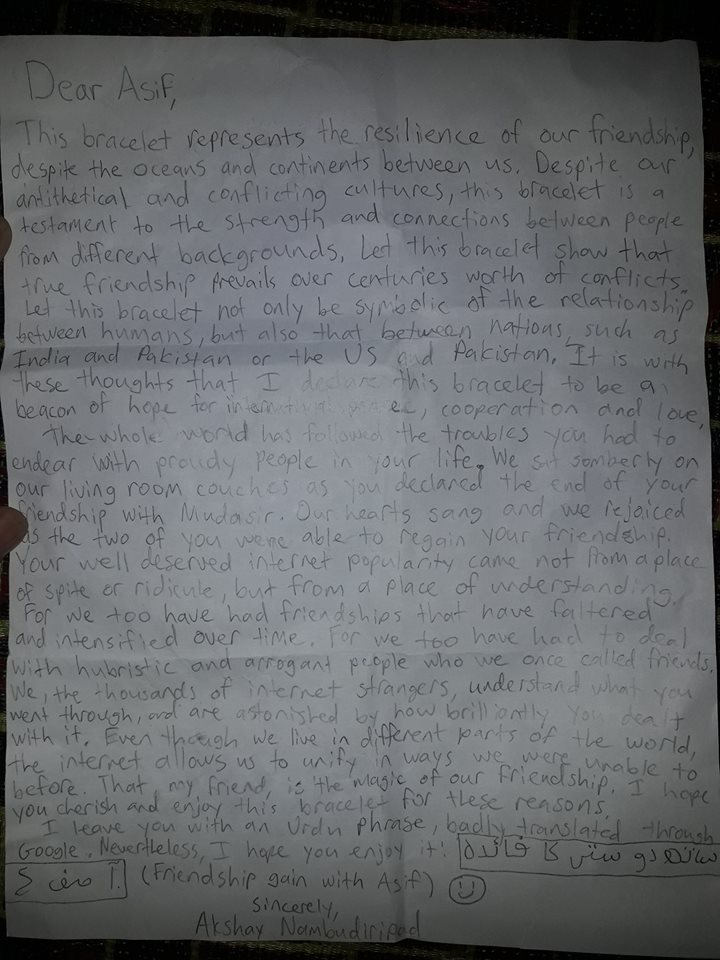 It all started nearly four years back in 2015, when Asif a resident of Gujranwala, Pakistan announced his separation from his best friend Mudasir on Facebook in a unique way. The guy created a tacky picture replacing his previous best friend Mudasir with his then-new best friend Salman which went extremely viral on social media. The online audience enjoyed and laughed at the uncommon approach of ending the friendship and memes related to the picture started pouring in.

The post that took the internet by storm in 2015! 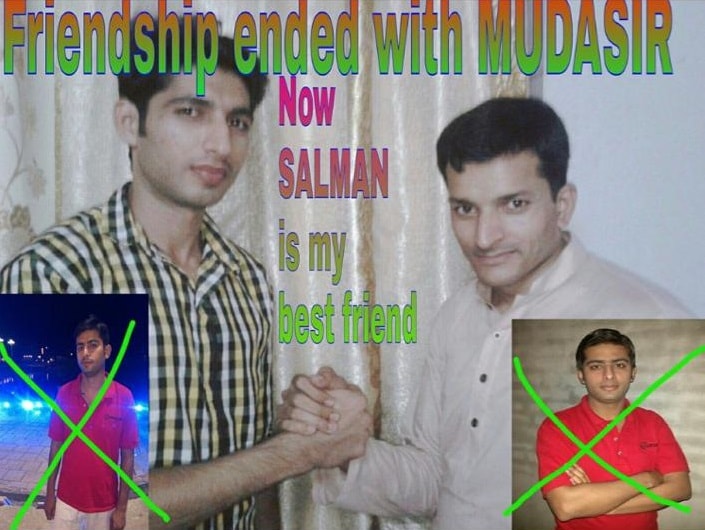 Check out: These Guys from a University in Islamabad Celebrated Their Friend’s “Break up” and We Love It!

Well, after ending his bond with Mudasir, Salman took the close corner for Asif but, after sometime social media was again filled with such posts. Asif had now regained his brotherhood with Mudasir and now Salman and Mudasir, both were his best friends. After a huge gap, Akshey also managed to take a good place in Asif’s heart and all four boys have now rounded up.

Careem’s Initiative To Strengthen The Engineering Sector Of Pakistan Is A Sign Of Hope For The Techies!
Muslims Protecting Hindu Brothers And Their Mandir In Ghotki From A Mob Is The Real Pakistan!
To Top