Kindly Shove That Racist Freedom Of Speech Up Your A**, Charlie Hebdo! - Parhlo

If you think you’re the only ones who carry an opinion hidden under the racist banner of ‘freedom of speech’ – well, here’s a newsflash for Charlie Hebdo and its European supporters: we’ve had enough of your prejudice, antagonism, discrimination and pouring hate. 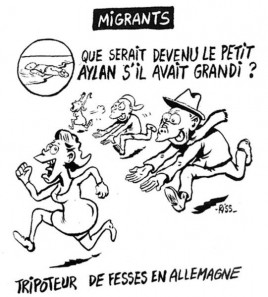 This is the appalling recent cartoon the French ‘satirist’ magazine drew. The discriminatory cartoon shows the poor and innocent drowned Syrian refugee angel Aylan Kurdi as a sexual predator in Germany. According to the negligent and inadequate Charlie Hebdo, if Aylan Kurdi had grown up – he’d end up as a sex offender.

The Islamophobes have sparked outrage globally with their latest offence. We’ve got a few questions for the liberal French magazine and it’s supporters.

1. When you talk about freedom of speech, does that give you the authority to spark hate against a religion whenever you feel like?

2. If Europe has such a firm stance on freedom of speech, why is it illegal to deny the Holocaust?

3. Is your liberal magazine, Charlie Hebdo, an attention-seeking satirical product or the way to World War 3?

4. If a crisis such as what Islam and the refugees are going through, ever fell on Europe, how would it feel to have your dead child as a pedophile when he grows up?

5. You say you’re taking revenge for the Paris attacks, do you, in your most common fucking sense know, that Muslims have suffered a thousand times more at the hands of terrorism? 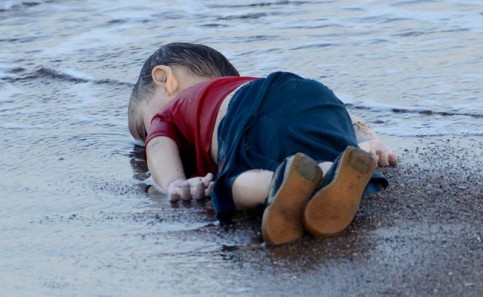 Leaving those very factual and relevant questions aside, we’d further like to ask you about how genuinely great your people are when it comes to sex and offending.

According to the most recent reports, every year, about 100,000 women are raped in France. About 10,000-20,000 of these rapes are actually gang rapes. Sex offence and rape has been a part of France’s history and we believe it isn’t wise to accuse an innocent dead kid of a crime your people commit in the name of fetish.

Let’s forget your love for rape and sex offence for a moment and talk about a taboo probably most of the Charlie Hebdo employees grew up under. Incest. Up until 2009, incest was legal in France. Mothers on sons, daughters on fathers – siblings sharing bed for sexual pleasures. Does that send a wave of content and joy through your shallow hearts?

Apart from all these facts, it is quite obvious that Charlie Hebdo has found a loophole in the masses and fallen head over heels for this new found way of attention seeking. All in all, if we were to speak on behalf of every sane brain in the world, they’d probably have only one message for your ‘satirical’ magazine: