This Foreigner's Reaction to Fireworks during #RonaldinhoAndFriends Will Leave You Laughing

In the aftermath of the mega event, #RonaldinhoAndFriends, we recall the highlights that made it special. Besides the emphatic face-off between legends of football in Karachi and Lahore among a crowd that just couldn’t believe what they were witnessing, there are many moments to look back upon and compile in the most memorable highlights of the bygone event. As players and others from abroad arrived, the security measures were cutthroat. No compromise was made at all and security forces ensured maximum protocol was underway at all times. 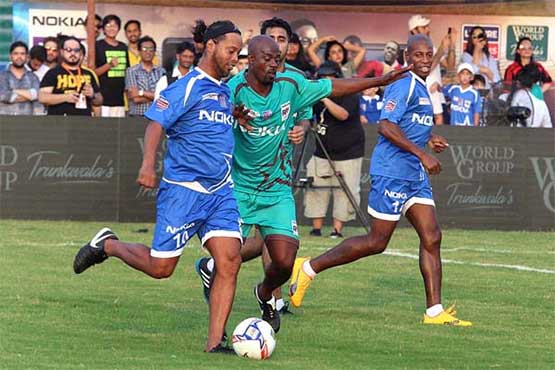 A viral video from Lahore’s Fortress Stadium has been surfacing all over social media. It includes a foreigner – not a football player – giving an interview to a news correspondent. What follows next is just hilarious and we cannot get over the priceless reaction of this guy. See the video below:

Can’t get over it! I can’t recall exactly how many times I have replayed the video above. He shows a priceless reaction, perhaps assuming a bomb went off near him and how the news reporter reacts is also brilliant.

Let’s take it on a lighter note. We know that our reputation abroad and among foreigners is in shambles. For a moment, this foreigner thought a bomb went off and it would make sense why because he is in Pakistan. It’s shameful to some extent what kind of reputation we have, but as we saw how laughter covered it up is simply great. You cannot even blame him! The noise of those fireworks going off is insane. Like, you cannot expect fireworks going off abruptly in that fashion. But how he ducks and assumes a threat is just hilarious. Seriously guys, let’s just stick to taking this on a humorous note.

Well, it was a pleasure hosting some of the legends of the game in Pakistan. We had the utmost pleasure of seeing them play live before us and all the rest of the people who made it here in Pakistan. We look forward to many foreigners and international football players arriving in Pakistan to play the beautiful game!

6 Key Findings In The JIT Report Which Might Make The Sharifs Have A Run For Their Money!
This Indian Drama Romanticizing a 9-Year-Old Boy Married to an 18-Year-Old Girl is Beyond Absurd!
To Top