Luke Wright Receives Hate After Turning Down The PSL 2 Final 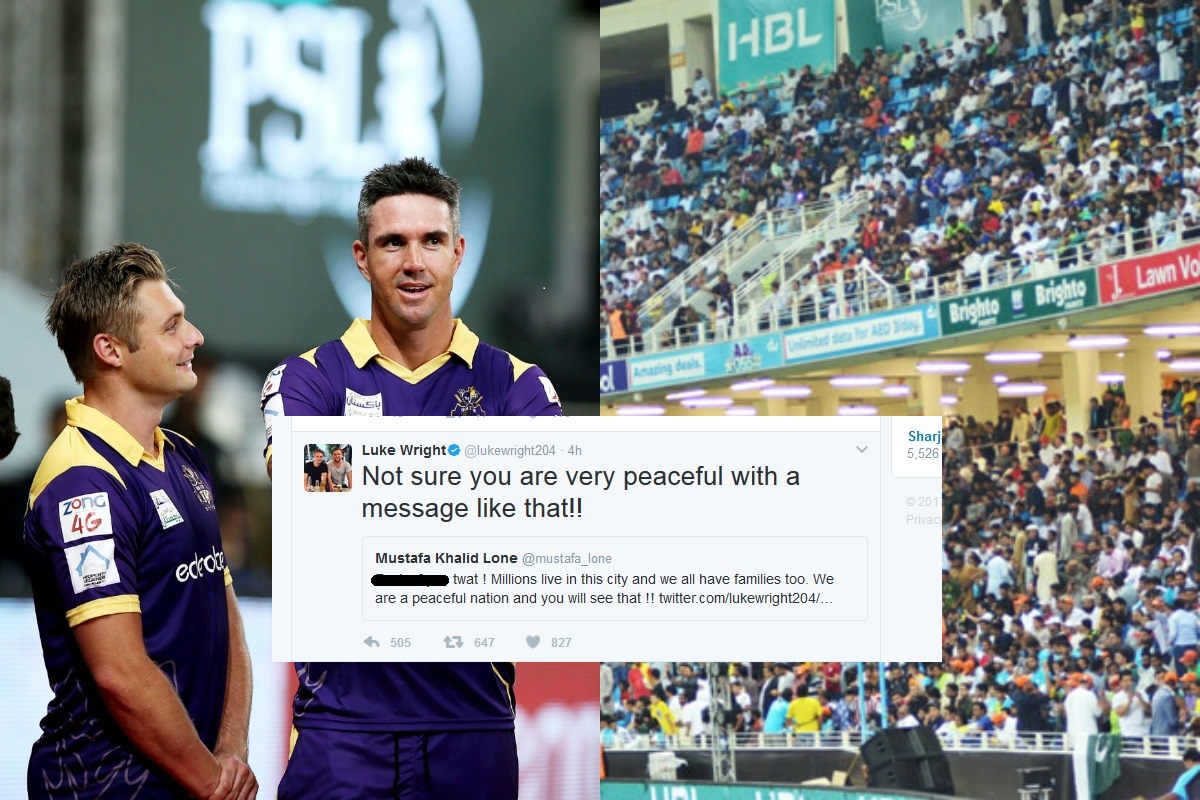 It was expected and someone would have done it anyway, foreign players have started to pull out of playing the Pakistan Super League 2 (PSL 2) final in Lahore. Although there were a few players from Lahore Qalandars, and other teams as well, who publicly stated that they would be coming to Lahore no matter what the cost, there are a few who have not yet decided. McCullum and two West Indian players were willing to play in Lahore if they had an opportunity. However, who are we to blame the likes of Luke Wright, Shane Watson, Ben Duckett, commentators Alan Wilkins, Dany Morrison, and foreign broadcaster Sunset Vine who have refused to come to the PSL 2 final in Pakistan?

The Quetta Gladiators were eyed by millions of fans in Pakistan to find out who would be coming to Lahore soon after their win against Peshawar Zalmi last night (Feb 28, 2017). Later, news appeared that all foreign players had bowed out of playing in Lahore followed by Luke Wright, Kevin Pietersen, and Tymal Mills, making it official by announcing on Twitter. Here is what they said:

Still not sure how we @TeamQuetta won that! Well played @iamAhmadshahzad @KP24 unreal hitting. It was nice 2 finally play. Finalists again ????

However, He Decided To Opt Out Of Coming To Lahore

It’s with a heavy heart I will not be coming to Lahore. I have a young family and for me a game of cricket is just not worth the risk 1/3

The Guy Even Apologized!

I’m sorry as I know how much it means to you all and hopefully in the future the safety will not be in doubt to come play there. 2/3

Thanks once again to @TeamQuetta and @thePSLt20 for having me. Such lovely people. Great tournament with so much talent. See u soon ???????? 3/3

Quite a Professional Notice!

Big thank you to @mfaisal_mirza for his hard work and dedication to the tournament and players. Appreciate your effort Faisal. ????

Here Is What KP Had To Say:

Not quite a thank you note however, he received hate as well. Remember when he entertained all of us and Pakistan was literally drooling and making memes about how PSL was better than IPL of India?

Here is what these “fans” had to say to these stars:

One of those PSL’s Pretty Faces With A Big Mouth!

Well, Perhaps KP Has His Own Priorities?

@KP24 Do you think people who live in Pakistan has lesser value than a rhino or an elephant ? Show some courage & join PSL Final

A Few People Who Actually Knew The Right Thing To Say

THANKS FOR EVERYTHING @KP24 (except knocking lahore out of the tournament. that hurt.)

Pakistani Showed Their Disgusting Side Once Again, This Time To Luke Wright!

Not sure you are very peaceful with a message like that!! https://t.co/oFRLCyV0ek

These ungrateful people should not get all the highlight. It should be given to those who actually supported the decisions made by all the foreign players opting out PSL, and it is highly appreciable of them that they outweigh all those who let us down through their unnecessary hate.

This Guy Actually Got A Reply From Luke!

@lukewright204 you should have think abt that before joining PSL, but it’s ur right to decide so we respect it, Thanks for joining

@lukewright204 @TeamQuetta @thePSLt20 It was great to have you Luke. You are always joking and having fun???? Respect your decision.

All the foreign players were given an option of not playing in Lahore if they did not want to. That is why, whatever decisions they make, it is not right for any of us to judge them. Let us all hope that the final takes place peacefully so that PSL 3 can have a larger prospective of taking place in Pakistan.

“If You Want Our marriage To Work, I Will Always Have Sex With You, But With One Or More Boys With Me”
This Restaurant In Pakistan Is Changing The Game By Having A “Robot” As A Waiter To Serve Guests
To Top