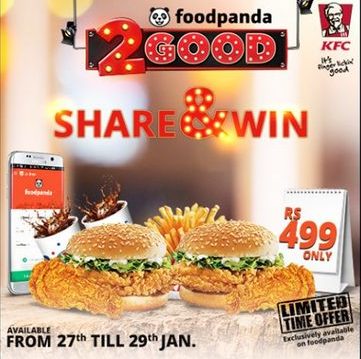 Think Karachi Eat or a 55 Rupee burger was a good start to 2017? Then it’s time for you to pump up your food diaries because the #2Goodfor499 is yet to come!

Pakistan’s most adored online food ordering juggernaut, foodpanda, has teamed up with Pakistan’s most popular fast food chain to kick start the year with a show stopper offer –  KFC’s best-seller deal exclusively on foodpanda at a staggering price – truly unmatchable for anyone out there.

Right near the end of the month when all broken foodies were looking for some easy-on-pocket deals, foodpanda has brought KFC’s 2 Good Deal for just Rs. 499 instead of Rs. 795. Yes, you read it right – 2 Zinger Burgers, 2 Chicken Pieces, 1 Fries and 2 Drinks from KFC for just Rs. 499.

But behold, foodies! The offer is from 27th to 29th January only, that also with a limited number of deals available. This news has taken the digital media by storm and all the KFC lovers nationwide can’t wait to grab the deal before anyone else.

Celebrities, food groups, bloggers, and customers – all are drooling over the crunchy zinger burgers and crispy fried chicken pieces that are simply #2GoodFor499! Some wish to share it with their BFFs while others are daydreaming to gobble down every single bite of it all by themselves.

And few are even planning to hoard it (because their favorite KFC rarely comes at such an unbelievable price). This hype reflects that foodpanda has hit on something too close to the hearts of foodies across the country and the sale is expected to leave behind all the Black Fridays too.

Nevertheless, to make sure you enjoy the finger lickin’ good taste of this limited time offer before it runs out of stock, here’s the ultimate guide for you: 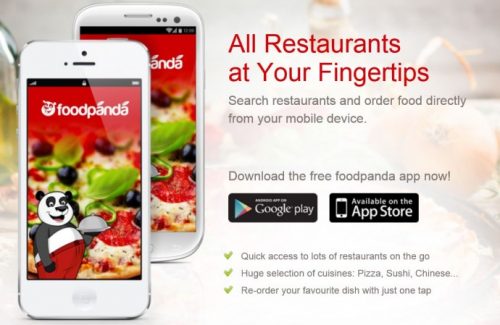 Bonus Tip: Order the most number of 2 Good Deals between 27th to 29th January using the promo code ‘#2GoodFor499’ while placing your order and win a brand new HTC phone, guaranteed!

So, be all armed up to savor KFC’s #2GoodFor499 this weekend before it runs out of stock and try your luck for a new phone too.

foodpanda is a global mobile food delivery marketplace headquartered in Berlin, Germany, and operating in 24 countries and territories. The service allows users to select from local restaurants and place orders via its mobile application as well as the website.

The company has partnered with over 40,000 restaurants. foodpanda is one of the fastest growing e-commerce businesses in Pakistan; recently the online giant achieved a truly extraordinary milestone in record time when it reached PKR 1 billion in revenue generation.

Read Also: Catch Your #HungerOut With Up To 60% Off & Free Delivery On 200+ Restaurants

You Can Now Watch Raees Absolutely Free On Facebook And This Is How! [SPOILER ALERT]
پریشانی سے چھٹکارا پانے کے 4 کارآمد طریقے جانئیے
To Top