You Won't Believe Why This Food Delivery Boy Didn't Give This Karachi Girl Her Order!

Food is a basic necessity. And Karachiites are great foodies. Perhaps that is why the restaurant industry is becoming a major booming contributor to Pakistan’s economy. Simultaneously, food delivery companies are now becoming a prominent part of Pakistani culture, well especially for the elite.

Many food delivery agencies in Pakistan are becoming widely popular. In addition, many people are ordering food via their service on a daily basis. Although sometimes people might have bad experiences. Overall, the service has become a great aid for foodies in Pakistan, especially Karachi.

So it took us by complete surprise how this girl was unable to enjoy her meal due to a rather relationship crisis! Now don’t get us wrong! It wasn’t the girl, whose heart got broken – well if you.

On a regular day, a girl named Ariba decided to order food online and while she waited for her scrumptious food to arrive, she was taken aback when the rider completely refused to provide it to her. Although, we know what you all might be thinking it could be due to some technical issues, possibly due to the rain, etc.

Why the netizens can’t get over the reason?

We thought so too, but the reason provided by this lionheart delivery guy is everything that is making Pakistani netizens rolling with laughter. 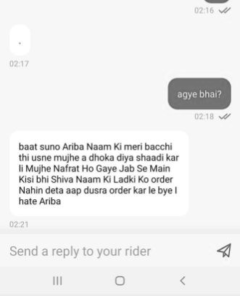 Ariba’s order was canceled because this broken-hearted rider’s former girlfriend also had the same name Ariba! Shocking isn’t it? To make matters worse, this broken man decided to take his frustration out on her. By telling her to reorder her food as he won’t be delivering it to her.

So apparently this gentleman is out to take revenge on every girl with the same name as his ex-girlfriend. Maybe, he really isn’t a fan of tough love! We do hope he finds true love soon. Above all, we wonder, did Ariba get her food order delivered or not!

Haha! We all love ordering food online but sometimes things can get a bit chaotic. Well! All is well in the end, right?

K-P Ph.D. Scholar Puts 700 Deadly Scorpions In Fridge As There’s No Research Lab In Province
Giraffe Spotted Inside A House In DHA Karachi During Rain – Are We Playing Jumanji?
To Top