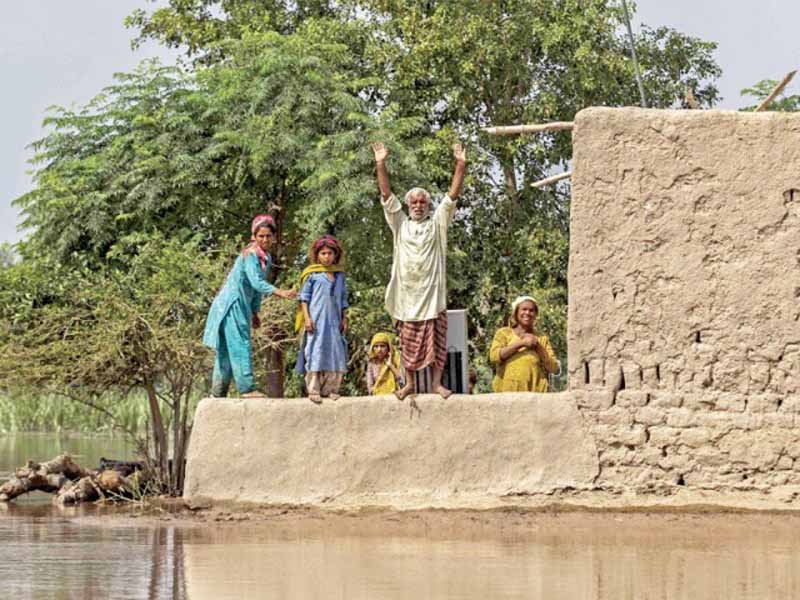 Up to 125 villages in the Multan district were inundated on Thursday as ferocious floodwaters let loose by monsoon rain made their way southwards.

The floodwaters are moving downstream through Punjab, inundating vast tracts of farmland.

A huge torrent measured at around 500,000 cusecs is expected to pass through Multan over the course of the day, according to the head of Flood Control Cell Multan Irrigation zone, Chaudhry Muhammad Zahid. Despite being hit by a second deluge, the water level at Trimmu headworks has actually fallen, lowering the flood threat in certain places.

The focal person of the districtâ€™s flood control cell, Ali Annan Qamar, insisted that Multan city itself was clear of any immediate danger. But the same could not be said about adjoining areas where as many as 125 villages were said to be submerged. Multan is a major agricultural centre and the main hub for the countryâ€™s cotton industry.

Hafiz Shaukat Ali, a senior administration official in Multan, said all schools in the area would be closed for the next two days.

Administration officials planted explosives in preparation for breaching three strategic dykes to divert waters away from Muzaffargarh and Multan.

A senior government official said the dykes were likely to be blown in the evening, but the blast may be put off if the waters abate.

The National Disaster Management Authority (NDMA) said seven more people had died in the flood, raising the death toll to 264 with more than 1.1 million affected â€” a figure that includes both those stranded at home and those who fled after the floods hit.

Most of the residents, however, had been evacuated from riverine and low-lying areas of the district as authorities anticipated heavy flooding. Although some people were stranded in the flood-hit areas of the district, Qamar said they would be rescued by the end of the day. A rescue operation was also in progress in the Shujabad and Jalalpur Pirwala tehsils, he added.

Qamar said a committee of experts had identified sections of dykes at the Shershah Protective Bund and the Head Muhammad Wala Road which would be breached only in case of emergency. Talking to reporters, Flood Control Cell In-charge Muhammad Zahid said bunds in Multan were in satisfactory condition and pointed out that the Akbar Bund â€“ the main safety wall between Multan and Chenab River â€“ and the Shershah Bund have a capacity of bearing one million cusecs.

A torrent of around 200,000 cusecs or below was recorded at the Akbar Bund, Zahid said. Likewise, the water level at Shershah stood at around 389.5 feet as opposed to its critical point of 393.5 feet.

Meanwhile, the flow of water at Trimmu headworks â€“ which was expected to be hit by a second deluge after Wednesday â€“ exceeded 600,000 cusecs on Thursday.

According to Zahid, a flow of 636,000 cusecs was recorded at the headworks between late Wednesday night and early Thursday morning. By 9am, however, the flow had dropped to 592,000 cusecs and was holding steady at this level, the official said.

On the other hand, the water level of Chenab River at Panjnad was rising consistently with the water flow reaching 131,500 cusecs on Thursday. The situation prompted the local administration to declare a high alert in the region and set up relief camps. Army teams also reached the area in anticipation of an adverse situation.

Residents of Uch Sharifâ€™s lower plain areas were directed to migrate to safer locations and Wapda had started to disconnect electricity in areas more likely to be flooded.

According to officials, water flow of more than 700,000 cusecs at Panjnad Headworks would break the Mudwala bund, resulting in inundating large swathes of Mudwala, Damarwala, Azmatpur, Bait Mulanwali, Makhan Bela.

He said that Rescue 1122 teams have arrived at Panjnad Headworks and relief camps have been established at Alipur tehsil. The army has established a medical centre in Rural Health Center Saitpur.

A massive flood wave is also expected to pass through Chachran Sharif today (Friday), before entering the Guddu Barrage.

Jhang districtâ€™s Shorkot tehsil was also under serious threat, as a torrent of flood water from Trimmu Headworks headed towards the area.

Meanwhile, floodwaters have started to recede from areas lying upstream of Trimmu Headworks in Jhang district and water levels had dropped by a considerable extent. Rescue operations, however, were still under way with army, police and Rescue 1122 officials shifting over 5,000 people to safer locations.

A similar rescue operation also continued in Chiniot district where more than 2,314 people were rescued.

In what can be termed as historic development, the Mangla reservoir attained its maximum storage level of 1,242 feet above mean sea level for the first time after the completion of Mangla Dam Raising Project.

The dam was raised by 30 feet in 2009 to increase water storage level of the reservoir up to 1,242 feet above sea level. Thus, water storage capacity of the Mangla reservoir increased to 7.4 million acre feet (MAF) with an addition of 2.88 MAF.

The raised Mangla Dam has not only stored additional water but is also playing a pivotal role in mitigating the current flood by trimming peak water inflows.

As a result of the raised Mangla Dam, the additional 2.88 MAF of water will irrigate another 1.314 million acres of land, and generate 644 million additional units of electricity per annum from the existing Mangla Hydel Power Station. Monetary benefits of Mangla Dam Raising Project are estimated to be about Rs111 billion in terms of enhanced agriculture produce, additional electricity generation and flood mitigation.

Situation of flood-13 Sept 2014 – Video
Punjab Govt. Releases RS. 2 Billion for Flood Victims, Will They Even Get It?
To Top