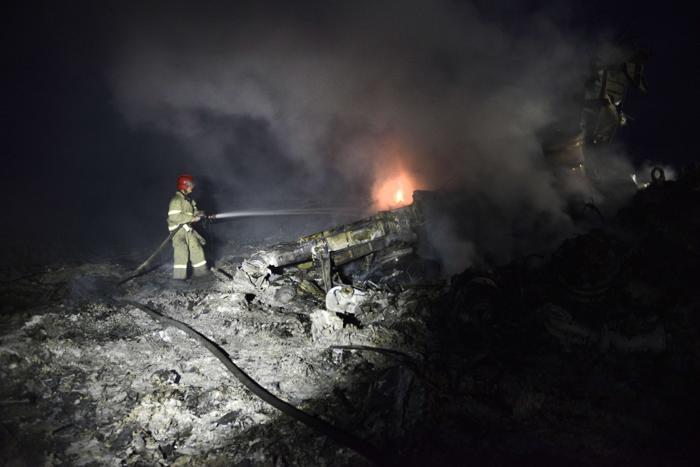 Ever since 9/11, it seems no tragedy or act of mass violence can go without a litany of Internet tin foil-types flapping their yaps about it on the Internet.

A roundup of the early theories:

1. Whatever brought down the plane was actually intended to bring down Putin:

Russia Today cites a report from the Interfax News Agency quoting unnamed sources who claim the doomed flight had a similar path as a plane carrying Russian President Vladimir Putin.

“I can say that Putin’s plane and the Malaysian Boeing intersected at the same point and the same echelon,” the source reportedly said on the condition of anonymity. “That was close to Warsaw on 330-m echelon at the height of 10,100 meters. The presidential jet was there at 16:21 Moscow time and the Malaysian aircraft—15:44 Moscow time.”

ROTHSCHILDS TRIED TO KILL PUTIN & HIT WRONG PLANE TODAY – ALL BECAUSE OF BRICS BANK & USD END – HOW STUPID COULD THIS ZIONIST IDIOT BE?

“At the same time,” the Russia Today report later corrected, “there have been reports contradicting Interfax’s report,” with sources telling other news outlets that Putin has not flown over the conflict-stricken country in some time.

2. Fake passenger passports are a sign of, well, something:

Russian television station Life News broadcast footage from the crash site that included images of passenger passports recovered at the scene, prompting Matthew Keys to post what appears to be a photo of a Dutch passport.

But the images of passports circulating online appeared too pristine for some observers on Alex Jones’s InfoWars.com conspiracy site to take seriously:

The revelations also prompted some internet sleuths to Google the names listed on the passports, and a number said they were unsatisfied with their discoveries: OK. How about the odds of a government/secret illuminati society completely fabricating an entire plane crash instead of just shooting one down?

3. Because the number 7 was involved, so was the Illuminati (also possibly aliens):

The human mind is programmed to find patterns in the world, but conspiracy theorists can often take this tendency to the next level. In this particular incident, many have seized on the date and flight’s relation to the number 7 (every conspirators’ favorite number).

“I followed the previous Malaysia Airlines Flight MH370 (exhaustively) and concluded that it must’ve been aliens; one of the first conspiracy theories to surface, and until we hear otherwise I’m sticking with it,” a writer with IlluminatiWatcher.com writes. “In that MH370 conspiracy theories post I referenced the fact that the alleged Illuminati might have been involved due to the number 777 being tied in. You’ll notice that this MH17 was also a Boeing 777.” So what does this all mean? If you find out, let this writer know.

4. The plane that crashed in the Ukraine is actually the same plane that disappeared in March:

Say what you will about the other theories, at least they make a little more sense than this—why would conspirators steal a plane, steal another plane, and then fake a crash with the first stolen plane?

Is this malaysian plane shot down by “terrorists” in ukraine the same plane that “disapeared” a few months ago?

Could the Malaysian plane that crashed in Ukraine b the same plane that disappeared some months ago?

Same plane that ‘crashed’ is probably the same 1 that went missing..

Okay, these are (probably) jokes, but after the network’s breathless, weeks-long “breaking” coverage of missing Malaysia airliner MH370 brought them huge ratings last March, at least a few people jumped to the initial conclusion that the network was behind it:

@CyclinArchivist CNN shot the plane down. I think we’re on to something.

Now if you’ll excuse me, that’s enough Internet for me today.