There’s no deniability that among other issues, the biggest flaw that lies in Pakistan’s societal system is greed to dominate. The prevailing VIP and elite class cultures have turned into a more supported stance because of the authoritative negligence.

Over time, the frustrated citizens have also been seen doing protests against such unlawful activities but still, no change. Earlier this month, a journalist was sent to jail just because he exposed the VIP protocol of KPK CM. However, recently, actress Fiza Ali was caught in a similar dilemma of the prevailing elite culture and the shared incident is condemnable.

Fiza Ali shares an incident that happened to her today . Logoun ka koi haal nahi even in Ramadan. This is how our ELITE CLASS lives during the month of HOLY RAMADAN I was on my way back from the hospital after getting my daughter checked from the doctor, as i reached my parked car it was blocked by a car next to me, i waited 15 mins her to go lil bak so that I can leave as behind my other cars wet also giving me horns to move and twice Securety guards also went to request this lady to pLz go lil bak but she did batameezi with them even with that poor labours.I honked several times at that lady to move her car so that I could go home but she didn’t move in arrogance like she owned that parking spot. She drove a Mercedes Car with Islamabad number.After confronting her I realised she wasn’t fasting and didnt scared of even men around and she was chewing a gum she even assaulted me by throwing my phone away and started hitting me badly abusing me by saying bitch so my maid took the rest movie from my fone as I have a right to record publicly.that to people to know that no matter who you are or which car you drive people should be polite and not abusive also with poor guards she was acting bad My child was Scared and I was worried about her but that woman kept her arrogance but didn’t move her car. Rather when she came to know about who I was while she’s took my naqab from my face while pulling my hair badly she covered her face and sat still in her car. Why is that the time she was thinking that m a normal person she was hitting me abusing me and when she got to k ow that m Fiza ali m a show biz person she got scared Not just this she also threatened me by saying “ MAI COLONEL KI BETI HOON MERA BANDA SHO HAI MAI TUME UTHWA DU GI MAI TUME NANGA KRWA DU GI”And also abused me aur she was acting like a Man and i got beaten by her as I was fasting so I refrained from saying anything in response.

As per details, the actress got into a brawl with a woman who claimed to be the daughter of a colonel. Fiza Ali, who was going back home from the doctor with her daughter was stuck in the parking because of the other woman. Currently, going viral on social media, the video posted by the actress clearly shows the adamant woman in Mercedes refusing to cooperate.

In the video, Fiza Ali is seen asking the woman to back her car so that she can pass through. Instead of reversing, the so-called daughter of the colonel refused to understand and started honking. Eventually, the actress, who was covering her mouth with dupatta had to step out, went to her and told her to avoid the blockage. 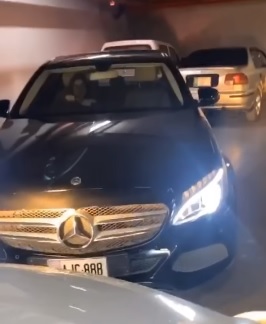 However, the woman got aggressive, came out of her daddy’s Mercedes and threw hands-on Fiza Ali. As Ali was recording the whole scenario, the lady then threw her phone and abused badly. Moreover, not only did the actress asked her to back off but the security officials in the parking also tried to convince the lady but she didn’t listen.

To threaten the actress, she said, ”I’m the daughter of a colonel. My boyfriend is a Station House Officer (SHO). I can kidnap you and strip you naked.” Further details reveal, the woman even pulled Fiza’s hair and assaulted her till she didn’t realize who she was. Upon finding out that its Fiza Ali, a media personality, the lady quietly hid her face and sat in the car.

It is indeed another shameful representation of the prevailing ‘elite culture’ in Pakistan and it needs to stop. Well, Fiza Ali was with her daughter and maid and was returning after getting checked for coronavirus.