5 Young Kids Drown To Death In Open Pond In Karachi, Who Is Responsible?

Karachi, the city of lights reports another dark incident. Reportedly, five young kids drowned in a pond made by a builder in Surjani Town Sector 7A.

As per reports, the innocent kids were playing at the shores of the pond due to immense heat and that too with a fast. According to sources, the builder did not build any safety measures around the pond. Furthermore, there is no guard securing anyone from getting drowned.

Besides, reports exhibit, the builder and his team knew about the depth of the pond still they made it in a public area that too without any safety measure.

Faisal Suzbwari reported the incident on his official Twitter handle. He said, “Unfortunately, 5 young kids drowned in a pond created by the negligence of Builder in Surjani Town. No1 from “extra” vigilant & equally corrupt Building Control Deptt & KWSB took care of this pit/pond and now 5 precious lives are lost.”

Unfortunately 5 young kids drowned in a pond created by the negligence of Builder in Surjani Town.
No1 from “extra” vigilant & equally corrupt Building Control Deptt & KWSB took care of this pit/pond and now 5 precious lives are lost@MQMPKOfficial reps reached there immediately pic.twitter.com/iMfSyZka78

Furthermore, there was a total of 6 kids and one survived, as per rescue sources. The deceased kids aged between nine and 14 years. Moreover, they were recognized as Zubair, Aman, Abdullah, and brothers, Aseed, and Maqsood.

As per the police and rescue operators, the kids had been playing on the place of an under-construction building; they then dived into the adjacent pit to chill off. However, rescue workers discovered their bodies and moved to a local hospital for statutory formalities. 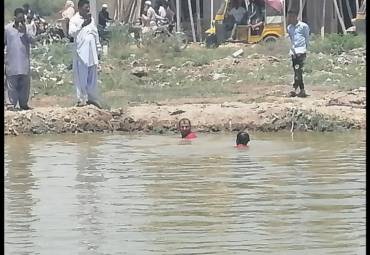 Town residents have blamed the builders and officials of the Karachi Water and Sewerage Board of carelessness. They maintained that it was water from a leaky pipeline that had stored in the 3 to 4 feet deep pit.

People on social media criticizing authorities and asking for a justice

People asking for the name of the builder

MQM for photoshoot only

Rabies, HEP ABC, AIDS, murders, killing by SBCA and what not given by dead bhutto to Sindh especially…
And still these shameless ruling the province shamelessly and some of us still supporting them from inside… Bhaye kamal ha.

On one end there is a lethal pandemic going on in the city of Karachi; on the other hand despite the lockdown builders are making buildings. The sad thing is, the builder will make the building; the government will clear the pit but the kids will not come back.