The First Western Journalist to Live With ISIS Fighters. What He Revealed About Them After Returning Will Blow Your Mind Up.

The first Western journalist ever to be given permission to enter the ISIS territories in Iraq and Syria returned from ISIS quarters with a warning. He said, “ISIS is much stronger and much more dangerous” than anyone in the West realizes. 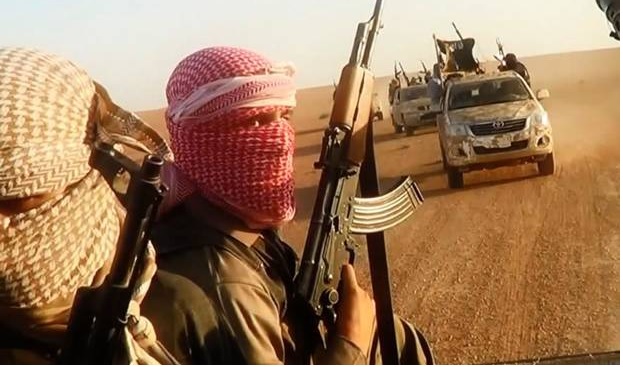 Jürgen Todenhöfer, 74, a renowned German journalist, travelled from Turkey to Mosul, the city with stronghold of ISIS, after prolonged negotiations with the leaders of ISIS. He plans to put his experience into words by publishing a summary called “10 days in the Islamic State”. He also gave a glimpse of what life is like in ISIS headquarters and what the summary will inform, while giving an interview to German media channels. 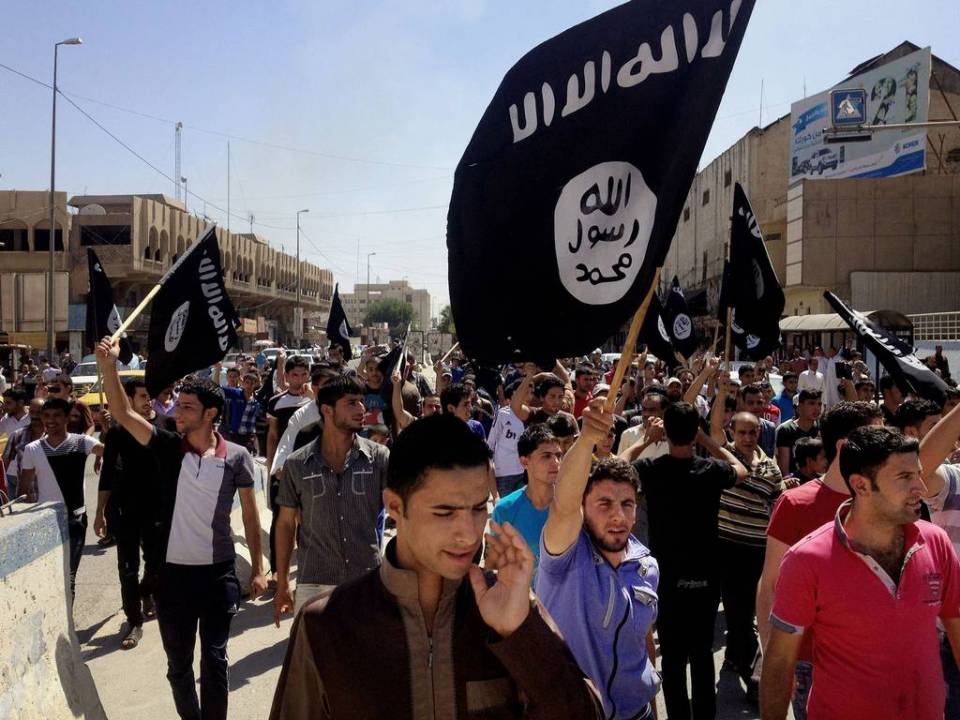 While giving an interview to websiteDer tz, Todenhöfer said that he lived in the same hotel in Benghazi where James Foley, an American journalist who was killed by ISIS on camera, stayed.

“Of course, I’ve seen the terrible, brutal video and it was one of my main concerns during the negotiations as to how I can avoid [the same fate],” he said.

Todenhöfer shared experience that while he was in ISIS territory he realized ISIS is much stronger and belligerent than the west thinks. He said that ISIS now has larger territory than the UK and it enjoys the frantic support and euphoric fervor of its followers that has no parallel in history of other militant organizations.

“Each day, hundreds of willing fighters arrive from all over the world,” he said in an interview. “For me it is incomprehensible.”

More: Jordan, Following Pakistan, Ends Moratorium, and Hangs 7 Convicts. Is Pakistan Emerging as a Trend Setter for Most Cruel Form of Punishment?

Todenhöfer lived among the ISIS high ranks, and also moved with them. During his stay, he observed their way of living, and the equipment they used. He also posted pictures on his Facebook page which showed German Heckler & Koch MG3 machine guns in the hands of ISIS. “Someday this German MG could be directed to us,” he said. 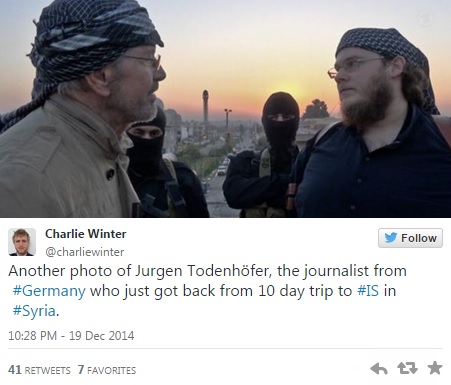 He said that ISIS fighters slept in the barracks formed out of the shells of blown-up houses. There are around 5000 fighters in Mosul, so widely spread that if the US conducts airstrikes on the Mosul, they can disperse quickly and the damage would be done to already ruined city of Mosul.

Todenhöfer says that this means that ISIS could not be defeated by airstrikes or US direct intervention in the war. “With every bomb that is dropped and hits a civilian, the number of terrorists’ increases,” he said.

Two days after his return to Germany last week, Todenhöfer gave an interview to local German channel. He said that ISIS is putting a lot of effort to establish itself as a functioning state. He said ISIS has devised “social welfare”, “a proper schooling system”, and to his astonishment, they had plans to provide education to girls as well. 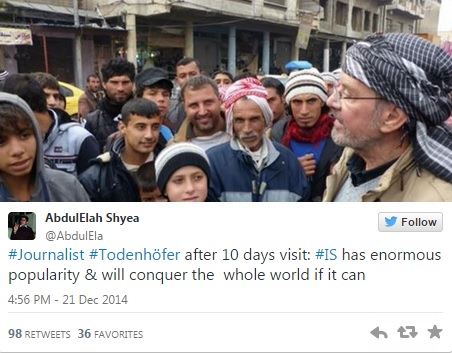 The most concerning aspect for him was ISIS’s belief that those religions and nations who believe on democracy shall have to die.

The rhetoric that was common in ISIS sphere was that it wants to conquer the world and anyone who does not believe in the ISIS’s interpretation of Quran will be killed by the group. The only people who will not be targeted were the “people of the book” i.e. Jews and Christians.

“This is the largest religious cleansing strategy that has ever been planned in human history”, he said while speaking to German media channel.

The ISIS-affiliated accounts on social media started acknowledging Todenhöfer’s account, appreciating him for his comments on ISIS’s role in establishing a functioning state. 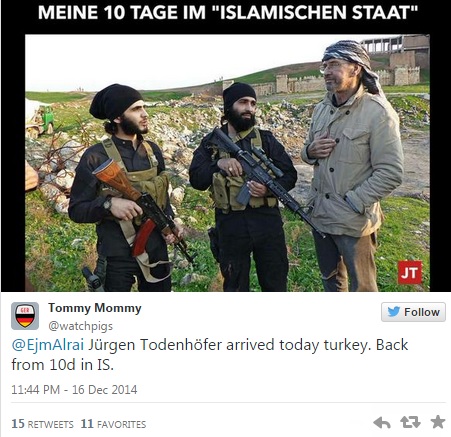 Jürgen, a German journalist, tweeted : “The Caliphate state is working to create life in the style of the Rightly Guided Caliphs who lived after the Prophet (PBUH) and it can move mountains.”

More: The Future of Palestine-Israel Peace Has Become ‘More Uncertain Than Ever’

Charlie Winter, a researcher for the anti-extremism thinktank Quilliam, said that ISIS-affiliated account son social media deliberately further the rhetoric of “formidable power of ISIS” because this notion leads to outrage of policymakers and government authorities. 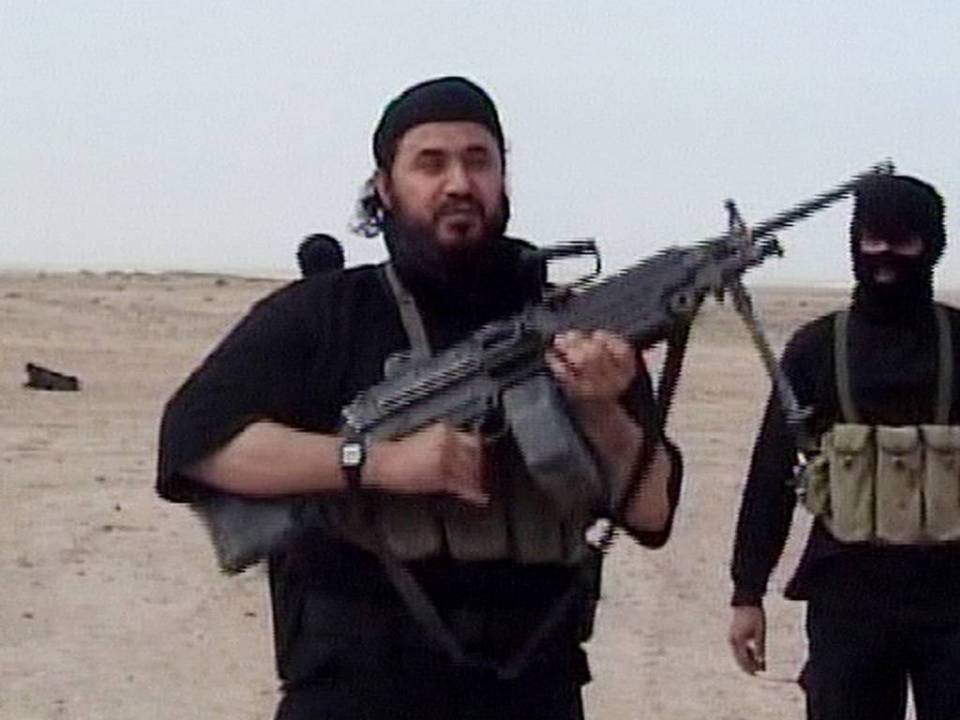 “That said, Todenhöfer’s comments on the massacre of the Yazidis and displacement of hundreds of thousands in Mosul have been routinely ignored by Isis supporters,” Mr. Charlie Winter said. “The facts are being cherry-picked to give a very narrow view of the situation that Todenhöfer was met with in Syria and Iraq.”

Todenhöfer plans to use his first-hand experience of Isis in a book he is writing about the group. He says on Facebook that he has always “spoken to both sides” in his 50 years reporting from war zones, including interviews with Syria’s President Bashar al-Assad and al-Qaeda, with Afghanistan’s President Hamid Karzai and with leaders of the Taliban. According to him, ISIS will soon become quite powerful to negotiate a level of co-existence with the West. “The only ones who could stop this now are the moderate Iraqi Sunnis,” he told, adding: “If you want to defeat an opponent, you must know him.”

Dear Arham, I will never forget the last day you went to school…
Jibran Nasir’s Very Important Message to the Entire Nation!!! #IAmPakistan
To Top