A massive fire broke out Wednesday evening at a market in the emirate of Ajman in the United Arab Emirates. According to the emirate’s police force, the fire started in the new industrial area of Ajman at around 6:30 pm local time.

The civil defense teams arrived within three minutes. Moreover, it took them more than three hours to bring the blaze under control. Parts of the market were closed for four months due to Covid-19 precautions. These areas collapsed and completely burned. Sheikh Sultan bin Abdullah al-Nuaimi, the commander-in-chief of Ajman Police confirmed this in a statement carried by state news agency WAM. 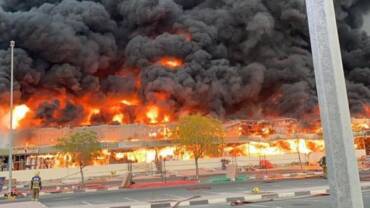 He stated, “Civil Defence units and 25 police and ambulance vehicles responded immediately, reaching the incident site within three minutes. They were able to isolate neighboring buildings and bring the fire under control.” Sheikh further confirmed that there were no casualties.

In addition to this, the authorities evacuated the medical center as a precautionary measure. According to the reports, the flames had quickly engulfed the area. While the massive fire did not cause any deaths or injuries, parts of the market completely burned to the ground.

Videos from the scene are making rounds on social media

– Massive Fire breaks out at a popular market in Ajman, UAE.

A large fire has broke out in the #Ajman market, located in the United Arab Emirates #UAEpic.twitter.com/g8ACVm9wPe

Thick plumes of black smoke can be seen rising to the sky with the raging fire.

A massive fire broke out in the market of Ajman area in the United Arab Emirates (UAE) .

Last night #Lebanon now #Ajman Ya Allah Reham What’s going on in Middle East my Allah save us from evils eyes Ameen pic.twitter.com/HOpmVUDZxn

The blaze came a day after a massive warehouse explosion that sent a devastating blast wave across Beirut– one of the oldest cities in the world. Additionally, more than 100 people lost their lives and nearly 4,000 injured.

Former Deputy Commissioner Revenue Gujrat Arrested On Corruption Charges
‘I Was A Child-Bride At The Age Of 15 – I Am Doing Ph.D. Today, Thanks To My Mother-In-Law’
To Top