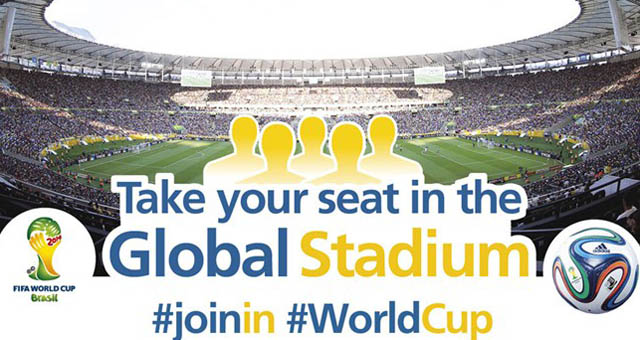 FIFA has revealed details of its Global Stadium, a social, online and mobile hub for the FIFA World Cup, which will help billions of football fans share their excitement and stay in touch with all the action.
The FIFA’s Global Stadium doors will open for each of the 64 matches of the 2014 FIFA World CupÂ so that fans can follow the action live, minute-by-minute, and engage with friends, players, coaches and fellow fans across the globe while supporting their favourite teams at the tournament. Fans can also exclusively win the actual kick-off ball from the match and vote for the Man of the Match.

FIFA.com has been redesigned in the run-up to the tournament with the social football fan in mind and this is complemented by a strong presence on social media. In April 2014 alone, FIFAâ€™s Facebook pages reached over 280 million users, the World Cup page currently has more than 18 million fans, and there are over seven million FIFA followers on Twitter, who frequently retweet and engage in conversation across the six language accounts. The FIFA.com site is optimised for mobile, and the official World Cup app will launch in early June.

Consumption habits are changing and the â€œsecond screenâ€ has transformed the traditional TV viewing experience with consumers using smartphones and tablets to engage more, particularly with sports content.

â€œWe aim to provide an all-round digital companion so that billions of fans can join in and share their excitement. Only the World Cup and digital can create this worldwide conversation.â€

FIFA will be using the following hashtags: #WorldCup and #Joinin while each match will have its own hashtag.

The accompanying Global Stadium infographic gives some top tips on how to make the most of the World Cup hub.

About FIFAâ€™s digital platforms
FIFA.com is the worldâ€™s official digital home of the FIFA World Cup and the online heart of football. It is also a one-stop shop for retail, event ticketing, accommodation and hospitality.

Via FIFA official app and social media accounts, we encourage the billions of football fans to #JoinIn and share the excitement of the #WorldCup in FIFAâ€™s Global Stadium.

NOTE: we will Post another article that lead you how to active that virtual stadium . Stay tuned !