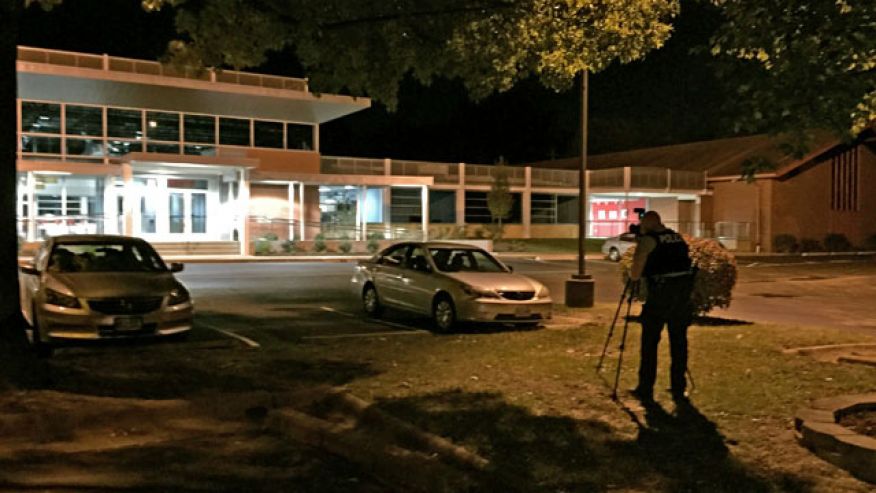 Authorities said a Ferguson (Mo.) police officer was shot and wounded while on patrol Saturday evening.

St. Louis County Police Sgt. Brian Schellman said the shooting took place at approximately 9:30 p.m. local time. KTVI reported that the officer was shot in the arm and sustained non-life-threatening injuries. At least a dozen law enforcement agencies responded to the shooting, and police helicopters canvassed the area, but no arrests were immediately reported.

St. Louis County Police Chief Jon Belmar told reporters early Sunday that the officer was shot after approaching two men at the Ferguson Community Center, which was closed at the time. As the officer approached, the men ran away. When the officer gave chase, “one of the men turned and shot,” Belmar said.

Belmar did not give further details about the officer’s condition. He said the officer returned fire but said police have “no indication” that either suspect was shot.

The shooting comes amid a fresh flare-up of unrest following the deadly August 9 shooting of a black teenager, Michael Brown, by a white police officer, Darren Wilson. The shooting sparked days of violent protests and racial unrest in the predominantly black community. Some residents and civil rights activists have said responding police officers were overly aggressive, noting their use of tear gas and surplus military vehicles and gear.

Belmar said he did not think the officer’s shooting was related to two separate protests about Michael Brown’s shooting that were going on Saturday night around the same time. Saturday’s shooting occurred approximately two miles from where Brown died near his grandmother’s apartment building. KTVI reported that dozens of protesters initially showed up at the scene in the mistaken belief that the officer had shot someone.

By midnight, approximately two dozen officers stood near a group of about 100 protesters who mingled on a street corner across from the police department, occasionally shouting, “No justice; no peace.”

On Thursday night, Ferguson Police Chief Tom Jackson attempted to march with protesters hours after releasing a videotaped apology to Brown’s family. In it, Jackson acknowledged Brown’s body should have been removed from the street much sooner than the four hours it was there as police collected evidence.

He insisted officers meant no disrespect to the community or the family. “I’m truly sorry for the loss of your son,” Jackson said.

Witnesses said Jackson agreed to join marchers Thursday but failed to tell officers monitoring his safety to stand down. They said that led to some officers forcing their way into the gathering, then pushing and shoving marchers. Several protesters were arrested.

“If (the officers) had just not come in, everything would be all right,” protester Steven Wash, 26, of Ferguson, said Friday.

“Jackson decided to come out and broker some peace and pretty much asked what he could do to build a new level of trust, and police continued to come, come, come,” Wade added. “The olive branch he tried to extend was great, and it showed he wasn’t a robot. But police forced him out like he was a diplomat in a war zone.”

The unrest Thursday occurred two days after many in the St. Louis suburb complained police did little to douse a fire that destroyed a makeshift Brown memorial.

The Justice Department, which is investigating whether Brown’s civil rights were violated, is conducting a broader probe into Ferguson police. On Friday, it urged Jackson to ban his officers from wearing bracelets supporting Wilson while on duty and from covering up their name plates with black tape.

Ferguson residents complained about the bracelets, which are black with “I am Darren Wilson” in white lettering, at a meeting with federal officials this week.

Brown’s shooting has also focused attention on the lack of diversity in many police departments across the country. In Ferguson, of 53 officers in a community that is two-thirds black, only three are African-American.

Schron Jackson said the officer, who has nearly 20 years of experience, was being treated at a hospital for a minor injury to his arm from broken glass. She said there is no reason to believe the two shootings were related.