Tragedy strikes in different ways. A poor man in Dubai is desperate to make sure that his son survives and gets well soon. This is the story told by a father of 10-month-old Mohammad Subhan, his son, who is suffering from a terrible intestinal disorder which makes it near to impossible to digest food or drink at all and needs a brain-dead donor.

The worst part of the disease is that it hampers growth and also leads to a lot of other inconveniences for the person. Sabir, who is the father of Mohammad Subhan, is facing a dilemma and is extremely eager to save his son.

He mentions that Subhan is going through a critical time. Right after the doctors confirmed the disorder, arrangements are being made to take the little boy to Pakistan for further medication and cure.

Sabirmentions that doctors have already informed him that there is a slight chance of having no cure to the disease which has inflicted his child into its grasp. According to the recent report, his son is suffering from ‘Microvillus Inclusion Disease’ (MVID).

This isn’t the first parent who is reaching out to get assistance for their children. A little while back, we heard about the Dubai-based young mother who wished to unite her children with their father.

What is Microvillus Inclusion Disease?

According to doctors, Microvillus Inclusion Disease is one of the rare diseases that impact or affect one’s intestines. It is an intestinal disorder that is usually diagnosed at birth.

However, there are some occasions where the diagnoses can delay up to two months after birth. MVID is then treated by giving different nutritional balanced formulas that are directly injected in the veins of the newborn. 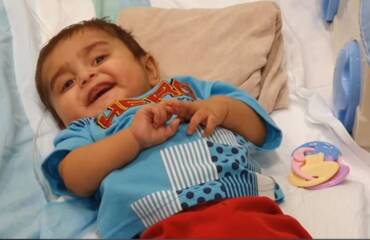 The entire expenditure of the treatment requires a lot of complications and is indeed very hefty. Hence, the poor father of Subhan is devastated after hearing his child is suffering from the disease. At the moment, doctors have advised the poor father to move to Pakistan for further treatment.

In addition, Father mentions that he will be moving to Pakistan real soon, in hope for a better chance of survival of his son and receiving a brain-dead donor. However, he is worried about the matter of finances. Other than that, Sabir mentions, “My son might have to go through a liver and intestine transplantation, father says he is ready to give my liver any day; however, search for a brain-dead donor’s intestine is still in the pipeline”.

On top of that, the poor man, Sabir after losing his job due to COVID-19, feels he is restricted to many opportunities of life.

KT Storybook: A father's desperate plea to save son

Ten-month-old Mohammed Subhan has been lying on a hospital bed in Dubai since birth. He cannot eat or drink and is has been surviving on intravenous feeds because of a rare intestinal disorder called Microvillus Inclusion Disease (MVID)

Sabir mentions that he has two more children, who are now unable to go to school and get proper education. The reason due to the shortage of funds. At the moment he hopes for a miracle from Allah to save him and his family from the saddening situation they are in.

In the end, Sabir thanks the management of Jalila Hospital in Dubai for their cooperation and love. He hopes that perhaps by coming to Pakistan, his son might get a chance at life. We pray and hope that little Subhan gets the chance at life that he truly deserves real soon.