The Alleged ATM Robber's Father Cries Over Son's Dead Body And Murderers Should Be Ashamed!

A surveillance video of an ATM robber in Faisalabad went viral for confidently revealing his face to the cameras and making funny faces at it before breaking the ATM machine and stealing the card that was stuck within. Everybody enjoyed the cheekiness of this thief until the news of him being caught by the police started circulating that revealed a lot of details including investigation footage that revealed the ugly face of the police and innocence of the robber. 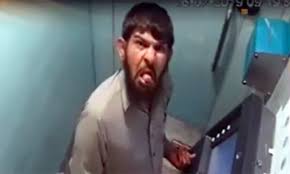 Upon further investigation, it was revealed by his family that Salahuddin was mentally disabled!

However, a video shot by a police officer asking him questions started making rounds that showed a scared Salahuddin asking the man behind the camera to not beat him. It was evident that this poor man was being ruthlessly beaten and tortured in the police custody.

Then the shocking news of his sudden death caught traction on the web as everyone was dumbfounded, followed by immense anger. It was and still looks like a clear murder case where an innocent man suffering from mental disabilities was tortured to death over stealing an ATM card.

This is the level of professionalism displayed by the police of this nation that when the robber is poor, he is not only caught but treated with disrespect and brutality. But elitist politicians who have been stealing for years and in trillions are not brought to justice and they roam freely, living lavishly.

The father releases a statement saying the contact details were tattooed on his arm!

Even then the parents were not contacted by the police and they tortured him for two long days.

Home address & number are tattooed on his arm. Police did not contact us even after his death: Salahuddin's relative.@UsamaKhawar#JusticeforSalahuddin pic.twitter.com/ELDfP2OLDK

A large campaign for the late Salahuddin has taken the Pakistani Twitter by storm and everyone is demanding justice for the poor soul with the hashtag #JusticeforSalahuddin. A murder case has been lodged against three policemen. We hope the killers are found and instantly dealt with.

The Muhafiz of this country have become the culprits. There is a dire need to reform the police of Pakistan before the moral-less and undignified personnel infesting such an honorable profession weaken the already plagued core of this institution.

Posters Of DG ISPR With A Strong Message Are Surfacing In IOK & Pakistanis Are Praising The Army!
Mohsin Abbas Haider’s Wife Files For Divorce And This Might Finally Put An End To Their Marriage!
To Top