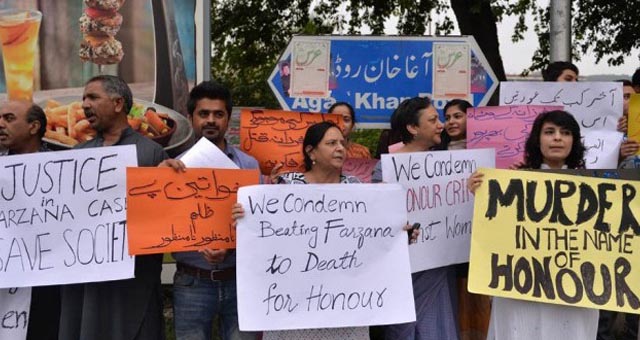 FAISALABAD: Murder in the name of honour Killing Â is â€˜haraamâ€™ and there is no permission in Islam â€˜for such a callous offenceâ€™, according to members of the Sunni Ittehad Council (SIC).

Some 30 muftis of the SIC issued this statement following the murder of a 25-year-old woman, Farzana, in Lahore on Tuesday last week, allegedly by members of her family including her father, brothers and cousins.


â€œThere is no justification for the killing of Farzana in such a barbaric manner,â€ said Mufti Muhammad Shareef Rizvi, speaking after the meeting. â€œThe accused should be punished under the law, which they violated when they stoned an innocent person to death.â€


A special moot was called by the SIC to consider incidents of killing of women under the guise of â€˜honourâ€™ on Sunday. Rizvi told the media that SIC members unanimously agreed that there is no concept of killing for honour in Islamic jurisprudence nor are there instances in which a woman can be killed on the pretext of â€˜honourâ€™. â€œIslam allows every girl, after attaining the age of puberty, to marry or solemnize her nikkah with her own will and in the presence of two witnesses,â€ he said. â€œIf the girlâ€™s parents have any objection, they should file a petition in the court.â€

Mufti Rizvi said that Farzanaâ€™s alleged honour killing had â€œdefamed Pakistan and the esteem and prestige of the judiciary as well as Islam at global levelâ€. He said the accused should be made an example of so that â€˜no one could dare to take the law into their hands in the future and make a mockery of Islamâ€™.