A Guy Shows A Family's Shocking Treatment Of Their Maid

How minute has humility become? We have increasingly come across instances where moral values are brought down compelling us to question our faith in humanity. Humility, in particular, is one of the traits that continue to wipe off as a character among people.

It takes absolutely nothing to be humble and down to earth in life. Most it can do is keep no differences among people which is exactly what we look for in a healthy society. Take a look at the developed countries and the kind of mindsets that prevail in, you will always find even the elite class being humble and down to earth. Nobody has any right to discriminate and none has a far superior claim over anyone. 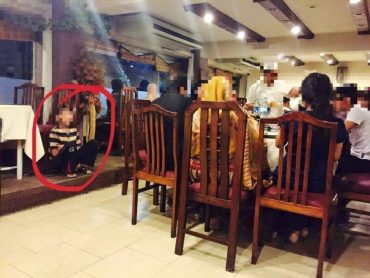 Pakistan was created on the idea of diminishing slavery. We were enslaved by our rulers and it needed to change if we were to have a better society. Our bygone leaders gave away their lives in hindering slavery that had succumbed our culture and customs for centuries. It was only for their mindset and values that people of the sub-continent got relieved of the shackles of slavery.

But we are back to square one… We may have been set free but in turn, we have started to do the things that we ourselves needed to be liberated from. 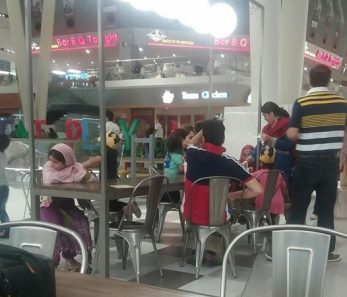 Another display of shamelessness, how can you be so morally dead.
This maid looking away from the family she’s serving 24/ 7 while they eat and gossip is an utter shame. It would cost nothing if they could have served her with something.

Ps: I wanted to call her and have food with me but I guess this guy in red & blue shirt saw me taking the picture and I had to move away to avoid the fuss he would make on all this, plus this picture has been taken/ shared with no intention of mud-slinging but is meant to highlight a very demeaning practice prevailing in most of our so-called “elite” class.

This kind of treatment is condemnable on all grounds. Look how they isolated her! Just imagine how much her confidence had swept away. This is a bitter personification of where our society stands. We have seen many incidents as such and we have raised our voices against them! But people simply do not learn…

We urge you to condemn such discrimination by all means. Try to stop it if you can. Educate people that nobody has any right to discriminate.

Shahid Afridi Announces His Next Move After Leaving Peshawar Zalmi!
Sahir Lodhi Showed His VERY Aggressive Side To The Haters And People Couldn’t Get Enough Of It
To Top