Family of Policeman Killed by MPA Achakzai Pleads for Justice

Recently, a viral video all over the media brought a shocking incident for us to witness. A policeman in Quetta was performing his duty, controlling the traffic and making sure the public follows the traffic rules and regulations. It is certainly not an easy job controlling traffic, specifically, the impatient motorists and riders make it very hard for our traffic police to allow a smooth transit, free of traffic jams. 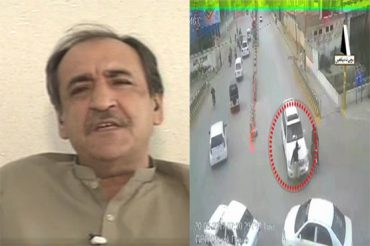 Sub-inspector Haji Ataullah was performing his duty when all of a sudden a white SUV came cruising from behind and did not bother to stop. The SUV was being driven by Member of Balochistan Assembly and Chairman Public Accounts Committee, Majeed Achakzai. As you saw in the viral video, the SUV did not stop for the policeman and ran over, colliding with another vehicle, leaving Haji Ataullah with fatal injuries. Following this tragic incident, MPA Majeed Achakzai was reprimanded for committing a criminalistic offense and was arrested.

The following video shows the family of late Haji Ataullah demanding justice. They have taken the leap to come forward on media and express their concern. They clearly deny forgiving MPA Achakzai for his crime against their family, disrupting their peace and absolutely leaving them no hope in this world.

The family has put together an effort to fight for justice. It is now the responsibility of this country’s department of justice to grant them a rightful justice. The suspect should be dealt accordingly, should be put accountable for the crime he committed and no charges should be withdrawn in this case. Justice for a common is still a far-fetched thing in this country, by all means, however, now that the media has raised their voice, it’s about time that the suspect is rightfully reprimanded for their crime.

This Brand Shows How Customer Service is Done Right and How to Win a Customer’s Heart
Become a published author today!
To Top