Sarah Khan is Mrs. Falak Shabbir now. The two love birds tied the knot last night in a private event and the festivities of their surprising marriage are almost over. The last two days had been super fun and colorful for not just Sarah and Falak but also for their fans, as the lived every moment of their big day.

The couple’s wedding came as a surprise to many of their fans. There were no juicy rumors about them dating each other or getting married soon. 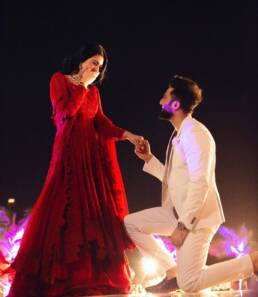 The Sabaat actress surprised her fans when she announced her engagement while flaunting her diamond ring. She made the happy announcement on Instagram without even naming her beau.

But, then pictures came out of their mayun and mehndi ceremony and the rest is history. We haven’t seen such perfect happy images recently. 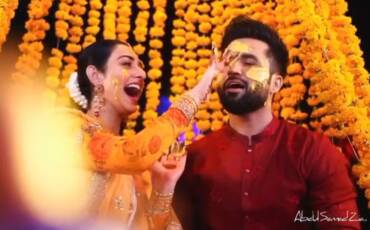 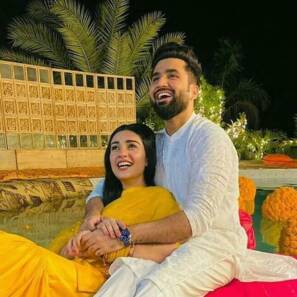 Their nikkah ceremony last night was also magical. The couple was seen happy in their wedding images and videos looking into the eyes of each other hand-in-hand. Sarah looked like a princess a beautiful wedding dress, while Falak looked handsome.

They both beamed with joy together. Pictures and video snippets from their wedding ceremony have taken all over social media.

In one of the videos, Falak can be seen singing a romantic song for his beautiful wife while Sarah couldn’t help hiding her happiness and blushed madly.

However, the highlight of the event was Falak’s fun exchange with the Nikkah Khwan as he kept on taking Sarah’s name wrong during the nikkah. Poor Falak had to correct him, after all, it was his big day and nikkah. LOL!