The former New Zealand cricketer Grant Elliott, a batting all-rounder, chanted the words, ‘Pakistan Zindabad’ in a video uploaded by actor, singer, and host Fakhar-e-Alam on his Twitter. Pakistani cricketer Azhar Ali was also in the video. Though Alam posted the cheery video for his followers to enjoy, it suddenly became viral. Social media complimented the video, appreciating Elliot for praising Pakistan by chanting, ‘Pakistan Zindabad’, and respectfully showing his support for the country.

Here is the video uploaded by Alam on Twitter which garnered 130k views as for now. The views also seem to be increasing by the minute. In the video, you can see Elliott standing in the middle yelling ‘Pakistan’. And Fakhar-e-Alam and Azhar Ali emerge from the back, completing the sentence by chiming in with, ‘Zindabad’. The hashtags speak for themselves as well. The video itself has helped create a new hype for the PSL season.

The tweet read, “Ladies & Gentlemen presenting the passion for Pakistan by the awesome Grant Elliot and Azhar Ali. I think it’s time to get Grant honorary citizenship of Pakistan as well.”

Upon popular demand, the trio made another video that Fakhar-e-Alam updated on his Instagram and Twitter. The trio is nodding their heads along to a Pashto song while sporting black glasses. Alam sits in the front, mouthing the words to the song. The rest show their support by moving their head to the beat and lip-synching along to the words. Once again, this video went viral on Pakistani Twitter. The views are currently 121k, and will unquestionably, increase considering the tweet is just a day old.

Alam said he dedicated the song to his Pukhtoon friends and tagged Javed Afridi in the post. “So we ran a vote and majority of you said to do a Pushto song….so here is Grant Elliot, Azhar Ali, and I, bringing you this video. Dedicated to all our Pakhtoon friends especially Javed Afridi. ENJOY….”

So we ran a vote and majority of you said do a pushto song….so here is @grantelliottnz @AzharAli_ & I bringing you this video. Dedicated to all our pukhtoon friends especially @JAfridi10 ENJOY…. keep an eye on Grant. #HBLPSLV #HBLPSL2020 #HBLPSL #HBLPSL5 pic.twitter.com/MiFhyMSY2p

Most of the tweets regarding these videos are positive and uplifting. Users are complimenting the trio for jamming to a Pashto song. It’s refreshing to witness the timeline filled with enjoyable content, especially because Twitter can turn into a warzone during the PSL season. Here is how Twitter reacted to these videos:

Read Also: The Official Schedule For PSL Season 5 In Pakistan

Erin Holland, the 2013 Miss Australia, model, and presenter for PSL also expressed her delight upon seeing the first video. Fakhar-e-Alam replied to her tweet adding, “Actually we do a lot more, but we cannot post it” to which she replies, “You’ve got my number,”

Careful what you wish for!

He further adds, “Careful what you wish for…..you don’t want to see 3 crazy people finding it impossible to put up with each other while waiting to go on LIVE TV....”

This little interaction garnered hundreds of likes for each tweet from Holland and Alam.

This user mentions a hilarious realization.

More and more people voiced their support for the newest video. Most of the other reactions under the tweet were also similar which shows the video didn’t only go viral but gave Pakistanis something positive and fun to gush about!

Grant Elliot Rocked……the best…!!!
He was more synchronized with the beat….isnt it Fakhar Bhai????
Love it 💖

The trio even shared a selfie with Sindh Governor Imran Ismail where they’re beaming and seeming as joyous as ever! 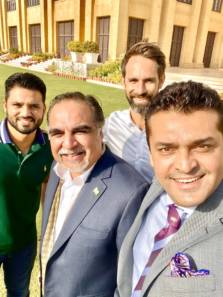 Hopefully, they will return for future Dubsmash videos, and help cricket fans lighten up for the PSL season!

What do you think of the videos? Did you enjoy watching Azhar Ali, Fakhar-e-Alam, and Grant Elliott dance to a Pashto song and chant ‘Pakistan Zindabad’ on Twitter? Share your thoughts using the links below.

Remember: Grades Are Important But They Are Not Everything!
Syra And Shahroz To End Marriage Over ‘Irreconcilable Differences’!
To Top