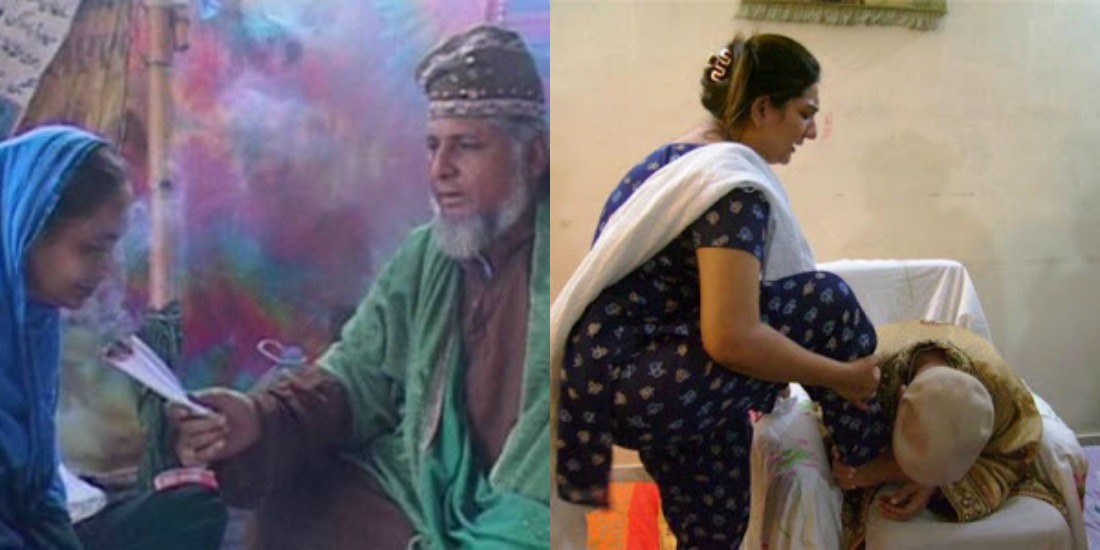 Pakistan is a country where people of different religions reside in a very complex society. Within these religions, there is a substantial amount of different beliefs and following of people. Among these beliefs, rests in the cradle of filth, one of the scourge most evils of Pakistani beliefs, which is of going to Shrines and visiting Peers and Fakeers.

It is pertinent to add here that not all Fakeers are Peer and neither are all Peers Fakeers. Most of these Peers are actually fake with zero knowledge of the religion and pay zero heed to the sensitivity of Islam. They, indeed, are running businesses through their set up shops in the name of religion, disrespecting the ‘Awlia’ and the well-learned scholars of Islam in the past.

Fake peers and their immoral activities with women

These fake peers do not go house-to-house asking women to come to them, it is the women who voluntarily come to these fake Peers in order to solve minor or major issues of their lives. Some of the most famous issues that women come to them is of ‘not being able to give birth’, ‘not giving birth to a male child’, ‘for their husbands’ long life’ and for some sort of security for their in-laws.

These fake peers then take FULL advantage of the illiterate lot of women and make them do the most heinous acts of infidelity, sadly, in the name of religion. Some peers have intercourse with the women behind closed doors (if she has not been able to give birth), this way, if the issue is with her husband, she gets pregnant by the peer and voila, the peer has done wonders, if not, she comes back for a second-third-then-fourth time.

Some ‘jaali saints’ fondle and molest these women for whatever reason they have come to him. They undress them, make them jump in the water, do aloof things at their will, like Jigsaw’s puppets. These women are robbed of their likelihood and are forced to do things even if they do not want to. All this, in the name of religion.

Most women of the hinterlands, if not through their will, are forced by their in-laws to go visit these pseudo-saints, who have NO knowledge of religion or anything else – all they know is to take money and mishandle women.

In the past, some of the well renowned Fake Peers and Fakeers of Pakistan have been exposed by different people and organizations. What has come to knowledge after their arrests and apprehensions is that these Peers do not even know the 6 Kalimas of Islam and have been milking the illiterate people of Pakistan for as long as 50 years.

It is up to the literate portion of society to liberate the masses on how these Peers are not the same as they were thousands of years ago, modern day Shrines and Fakeeri Nizaam is nothing but a hoax and means to mishandle women and rob them of their money and dignity. It is also up to the patriarchal heads to make sure no woman in their family goes and visits these Peers.

It is the women and people of Pakistan who go out of their way, travel days and spend thousands to see these Peers, not the other way round. If you stop going to them, they will shut shop and run away themselves.

Read Also: Increasing Rate Of Black Magic In Pakistan And The Visible Presence Of Taweez Culture

6 Airline Crashes In Pakistan’s History You Need To Read About!
This Is How Alcohol And Heavy-Drinkers In Pakistan Affect And Harm Their Own Families
To Top