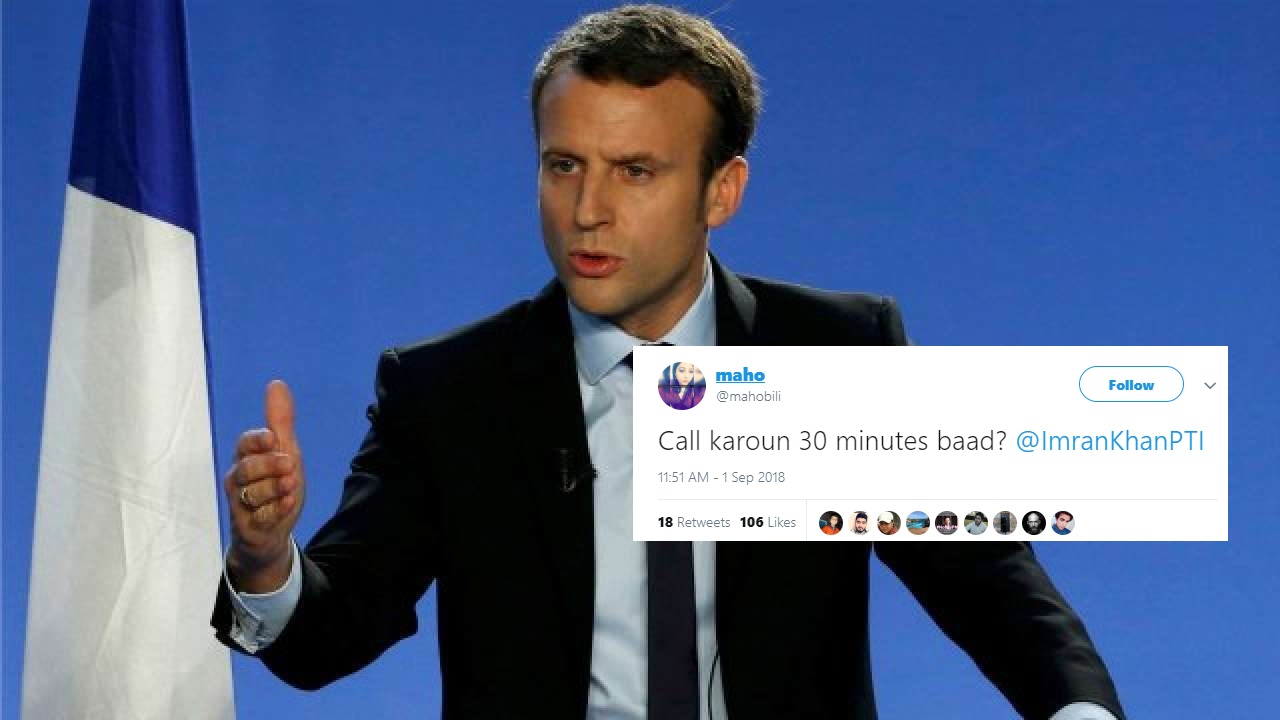 So these past few days of the Naya Pakistan have been a bit too critical on Prime Minister Imran Khan and his party in power. All eyes on the promises made, Pakistanis, especially the opposing parties cannot get enough of looking closely into every detail there is.

According to Hamid Mir, French president Macron called Imran Khan while he was in a meeting with the journalists.

According to Hamid Mir, who was also at the meeting, Imran Khan asked his foreign secretary to inform the French president to call after 30 minutes.

New Pakistan.French President @EmmanuelMacron called Prime Minister of Pakistan @ImranKhanPTI today but he was busy in a meeting with journalists including me Foreign Secretary Tehmina Janjua wanted PM to attend the call but PM said I am busy here tell them to call in 30 minutes

Saad Rafique Jumped In this Tweet and Mentioned How No Foreign Politician Calls Without Prior Notice!

no head of the state calls with out prior intimation so it was a drama by IK managers ???

And Then Came the Jokes And Trolls

Did he call back?

What kinda journalism is this? HamidMir is acting like a mother in law. You've always tried to defame Pakistan & this tweet is absolutely a sedition & Mir you've always been a Fitna, a shameless character. Mr Macron trust me this man Hamid Mir is a disgrace to the ppl of Pakistan

But Here’s the Biggest Joke – Someone Made a Fake Account of Emmanuel Macron And The Tweets Were Just Hilarious!

The account which has now been reported and removed, here’s what it tweeted:

But Someone Then Made a Fake Account of Imran Khan and Oh GOD!

Sorry I could not call you back bro, call rates for France very expensive and we are observing austerity. Send me your whatsapp number. Thanks for understanding https://t.co/BF2DIVdlSN

And Then Here’s What ‘Donald Trump’ Tweeted

So anyway, all for laughs and all, but if the PM of Pakistan did schedule the call AND the meeting at the same time, one cannot help but notice how wrong that is.

Given then amount of news PTI and Imran Khan have been making lately, they surely need a spokesperson to clarify the things one at a time.

The Story of this Woman Who Lost her Son in 2009 Will Definitely Give You A Reality Check
First Lady Bushra Bibi Visits An Orphanage and Pakistanis Are FINALLY Saying Nice Things About Her!
To Top