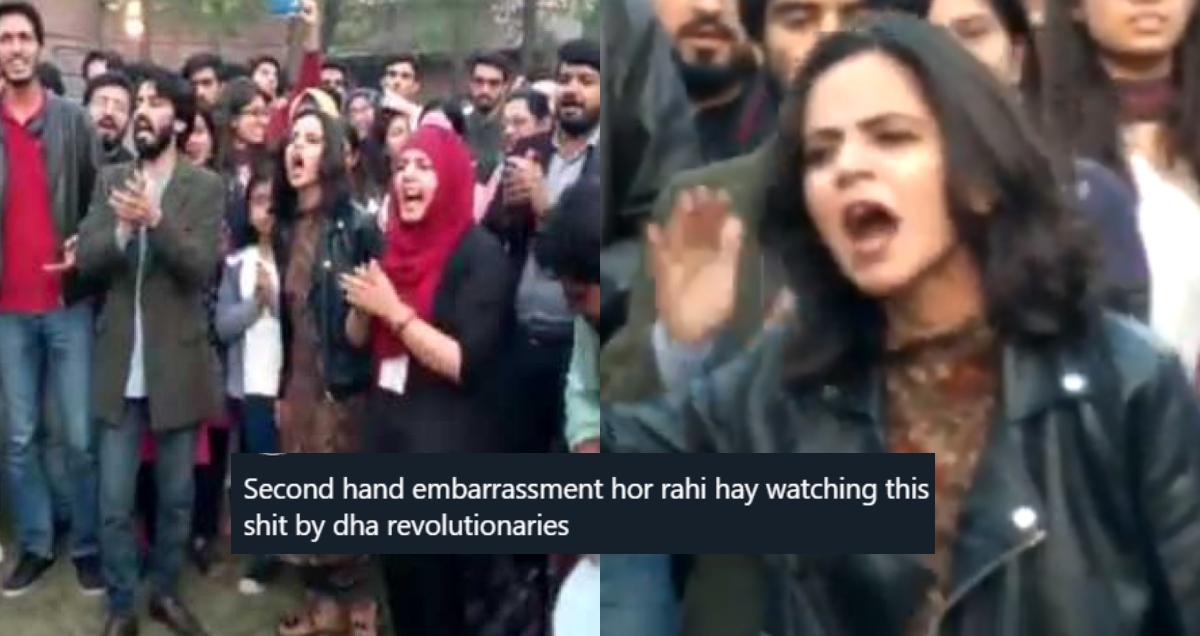 Social media can be a very dark and gloomy place, even with all its pros. If you end up on the wrong end of the stick, people on the internet can act mercilessly. Something similar happened at the Faiz Festival 2019.

‘Sarfaroshi ki tammana ab hamare dil mein hai, dekhna hai zorr kitna baazu-e-qatil mein hai’ – this was the slogan raised by a group of young activist students. Even though nothing seems to be wrong with the prose, social media users have been very judgemental of the viral video.

The girl, Arooj Aurangzeb, was seen rocking a leather jacket screaming the poetry on top of her lungs. A group of peers accompanied her with the jam. But people have been very vocal with their opinions. However, most of the opinions are in regard to the poetry not being written by Faiz Ahmed Faiz.

Sarfarozi ki tammana was a poem written by Bismil Azambadi in 1921. Furthermore, people have been lamenting the context of the poem as well. Many have been saying that Faiz himself was an ‘elitist’ even though his poetry was revolutionary.

I think I downloaded the wrong Rang De Basanti. pic.twitter.com/aPlCDrp7Gz

Some thought that the leather jacket girl was trying too hard… but why wouldn’t she?

I feel bad for her, she is trying too hard 😜 https://t.co/f6aiIJa4WF

I'll be that guy. This kind of "revolutionary" shit doesn't look good from a crowd which will likely disperse and go home in their air-conditioned civics.

This guy talks about how ‘liberals’ will make hue and cry, but not vote on election day

Then there’s the evident case of ‘second-hand embarrassment’

It is pertinent to add here that the majority of these students from Lahore are leftists. The ‘performance’ at the Faiz Festival was an invitation pass for others to attend the Students Solidarity March being organized on the 29th of November. Even though Sarfaroshi ki tammana is not a product of Faiz, but its revolutionary nature certainly coincides with Faiz’s poetry.

The Students Solidary March is being conducted to restore the rights of student bodies and unions in institutions. Moreover, it will also mobilize protests against budget cuts by the government for education.

Even though the students’ stance seems legit, conversations about the contradictory nature of elitism and revolution continue to pour in on social media. On a lighter note, the video can be looked at as the energetic youth of Pakistan voicing their opinions on a set-stage like Faiz Festival.