The host of Jeeto Pakistan and famous actor Fahad Mustafa is in the limelight on social media again. This time for allegedly showing his physique during Ramadan. His recent picture depicts that the actor is hitting the gym for quite some time now.

However, social media has left no stone unturned in making fun of Fahad’s picture. One tweet asking “Is this the Islamic Republic of Pakistan?” started the butterfly effect as the picture depicts a rather ‘revealing’ Fahad Mustafa.

Is this Islamic Republic of Pakistan? pic.twitter.com/fA7ro9HuMl 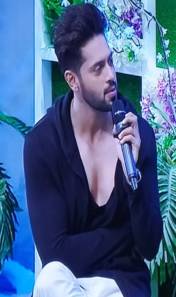 In general Fahad Mustafa has a decent image; nevertheless, his recent viral picture has altered his image form, decent young men, to a casanova.

This is exactly why Corona is spreading in Pakistan

This is exactly why corona is spreading in Pakistan – disgusting

Probably he left his ‘Dupatta; in his car

Where is your duptta fahad???
Your izat lies in your cleavage.
COVER ITTTTT

OMG!!!!
How shameless, no wonder we experienced earthquakes last year, not to forget the Coronavirus.
It’s all their fault.
Ugh

Is he changing his gender….. Or what

Many are linking Fahad’s new look with the novel coronavirus. Fahad’s attire revealed his cleavage this what some said. Do men have a cleavage? Really? Ah, forget it’. Besides, many feminists along with media, who were irked by Molana Tariq Jameel’s comments called it male ‘Behayi’ and reason for disasters.

His debut film was Na Maloom Afraad released in 2014 and director by Nabeel Quresh; a box office hit.

These Pakistani Brick Laborers Have Become Tik Tok Celebrities & The World Loves It
5 Young Kids Drown To Death In Open Pond In Karachi, Who Is Responsible?
To Top