Always having to see the bright side of the internet over the years has somehow made many of us neglect the fact that it has cons too just like every other thing. The bigger picture turned us blind towards the secret evil and dark things that it contains, plus having nearly no implementation of law also paved the way for it to flourish and target more people. Having said that the obscene material especially including child pornography is always associated with the dark web, but now it’s being shared on Facebook groups as if it’s not at all a problem. 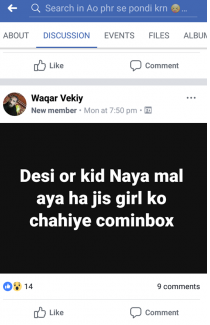 It wasn’t long back when a group on Facebook made memes on Zainab and Zubaida Apa. The group also had an abundance of child pornography material that was continuously being shared. Keeping in mind that Zainab’s case was no joke, instead was a sensitive issue, but for these ruthless people, it was another hot topic in the market to make fun of. Moving on, the group got into trouble as soon as the article regarding them went viral and started gathering people’s attention.

In result, the admin shut down the group but today yet another group titled “Ao Phir Se Pondi Karn” was spotted containing the exact same stuff as the previous one. A majority of the group members are using their fake profiles but there is one person named Mr. Asad Durrani whose profile seems to be legit. Till now, the group is filled with sexually explicit content including child pornography also.

IMMEDIATE ACTION MUST BE TAKEN AGAINST THE GROUP MEMBERS 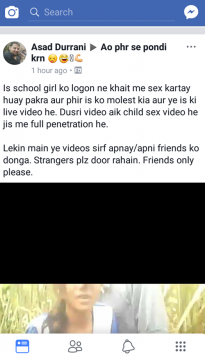 Pakistan is no stranger to any of this issue, but still, we decide to close our eyes and assume that everything is fine; until the incident of Zainab forced us to open our minds, hearts and accept this reality. Even after witnessing a series of such cases no action is being taken against any group providing explicit content. Isn’t it illegal to be doing so? It’s extremely disappointing to witness that this nation has made it a habit of not addressing any issue until it reaches immense heights.

HOW LOW CAN THEY GO? THEY ARE ALSO CRIMINALS TO BE PROMOTING SUCH MATERIAL Not having any laws and implementation leaves us with a question that are we prepared to witness more cases like Zainab? Because these filthy minded people are still out there roaming around freely. Are we really prepared to face the future without fixing our present? If you liked the article then like, share and comment down below to give us the feedback.

Read Also: Child Pornography: Here’s All You Need To Know About The ‘Dark Web’