Earlier today, Pakistan incurred a huge loss of human lives after a national train “Tezgam Express” got caught in an unfortunate fiery incident. Since the news broke the media, different statements are coming upfront regarding the incident. Well, recently, an eyewitness of the eventuality has made shocking revelations on the Tezgam incident getting the authorities to blame.

An eyewitness reveals the actual cause of the Tezgam incident!

Reportedly, Tezgam Express was moving from Karachi to Rawalpindi when it got engulfed in the fire which got intense over time. At first, the cause of the fire was said to be the gas cylinders brought in by the passengers but the tables have turned now. Apparently, this eyewitness of the “Tezgam Express” incident has some really shocking details to reveal about the fire eruption.

While to a local news channel, this eye witness reveals the real cause of fire!

Soon after the incident became public, statements from concerned authorities started to show up. According to media reports, Railway Minister Shaikh Rasheed Ahmed said, “The incident took place because of the gas cylinders carried by tableeghi jamaat (religious group) members.” But the recent revelations speak a completely different story regarding the severe mishap.

Deeply saddened by the terrible tragedy of the Tezgam train. My condolences go to the victims' families & prayers for the speedy recovery of the injured. I have ordered an immediate inquiry to be completed on an urgent basis.

Extending his condolences for the affected families, PM Khan wrote, “Deeply saddened by the terrible tragedy of the Tezgam train. My condolences go to the victims’ families & prayers for the speedy recovery of the injured. I have ordered an immediate inquiry to be completed on an urgent basis.”

The fire erupted because of the ceiling fan not gas cylinders!

On Thursday, October 31st, Tezgam Express was moving towards Rawalpindi from the metropolis when it caught fire. Apparently, the cause of the uncontrollable fire was believed to be the passengers preparing their breakfast on gas stoves. But as per an eyewitness, it happened because of the short circuit in a ceiling fan that needed repair from the last 4 days.

According to the eye witness, the fire erupted from the AC compartments where gas cylinders were not even allowed. After the unrepaired ceiling fan fell on the ground because of a short circuit, it grasped two coaches of the Tezgam train. Eventually, to save themselves from jeopardy, passengers jumped from the moving train in order to save their lives.

The affected train Tezgam didn’t have fire extinguishers for safety!

Furthermore, he stated that the train had no fire extinguishers or other safety measures to opt for. Later, a Pakistan army group and other forces got engaged in saving the affected passengers and shifting them to the hospital. In the unfortunate event, nearly 73 passengers have lost their lives while many are being treated in the District Headquarters Hospital (DHQ). 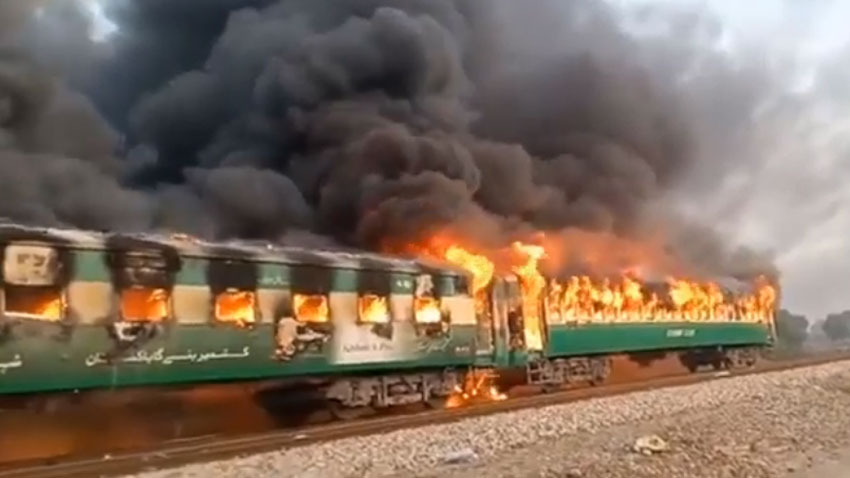 Since the unmaintained and rusty trains of Pakistan lack authoritative supervision, the rotten condition speaks for itself. Back in September, a passenger recorded sparks coming out of Kohat Express train’s toilet. As expected, the concerned authorities bet no eye on the issue and the Pakistani passengers were left on their own.

Launchpad 14 Is The Perfect Place To Kick Start Your Entrepreneurial Dream!
PM Imran Waives Off Passport Requirement For Sikhs Visiting Kartarpur!
To Top