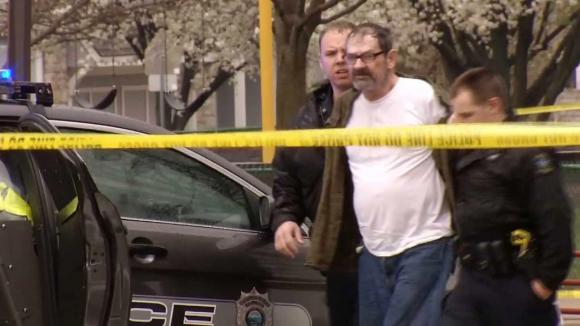 Frazier Glenn Cross, 73, of Aurora, Missouri, is led to a police car after his arrest following shooting incidents which killed three people at two Jewish centers on Sunday in Overland Park, south of Kansas City, Kansas in a still image from video April 13, 2014.

(Reuters) – The suspect in the Passover Eve killings of three people at two Jewish community centers near Kansas City is a former Ku Klux Klan leader with a history of spewing vitriol against Jews, law enforcement officials said on Monday.

Frazier Glenn Cross, 73, faces local and federal prosecution on hate crime charges after his arrest on Sunday for a shooting spree that killed a teenager and his grandfather outside a Jewish community center, and a woman visiting her mother at a nearby Jewish retirement home.

Both facilities are in Overland Park, Kansas, an upscale suburb outside Kansas City, Missouri. It was a bitter irony noted by many in the area that none of the victims was Jewish. The boy and his grandfather were members of an area Methodist church and the woman attended a Catholic church.

Cross, of Aurora, Missouri, had a prior criminal history and was known by law enforcement and human rights groups as a former senior member of the KKK movement and someone who had long made public comments against Jewish people, according to the FBI.

“Yesterday’s attack … strikes at the core fundamental freedoms … of how our country was founded and what we live by every single day,” said FBI agent Michael Kaste. “We’ve now determined that the motivation behind this was a hate crime. The acts that this person committed were the result of beliefs … that he had.”

Johnson County District Attorney Steve Howe and U.S. Attorney for the District of Kansas Barry Grissom said they were collaborating on charges in local and federal courts.

Both the Southern Poverty Law Center, a leading anti-hate group, and the Institute for Research and Education on Human Rights (IREHR) have tracked Cross, who also goes by the name Frazier Glenn Miller, for years. The groups say he was involved in creating an armed paramilitary organization in North Carolina 20 years ago.

The Southern Poverty Law Center (SPLC) said Cross is a “raging anti-Semite” who has posted online commentaries that include “No Jews, Just Right” and calls to “exterminate the Jews.”

Cross is a former leader of both the Carolina Knights of the Ku Klux Klan and the White Patriot Party, groups aimed at the unification of white people, targeting African Americans and others for intimidation, according to the SPLC. He served time in prison on weapons charges and for making threats through the mail, the group said.

“His worship for Hitler and Hitlerism is real,” said Leonard Zeskind, president of IREHR, in a statement issued Monday.

The Anti-Defamation League said Cross was one of the “more notorious white supremacists” in the United States in the early 1980s, though his involvement over the last decade has been on the periphery of the white supremacist movement.

The league issued a security bulletin to U.S. synagogues and Jewish communal institutions urging them to review security plans for the Passover holiday that begins at sundown.

The shootings started around 1 p.m. at the Jewish Community Center of Greater Kansas City.

High school student Reat Griffin Underwood, 14, was with his grandfather, 69-year-old William Corporon, outside the Jewish Community Center when attacked. The teenager was at the center to audition for a singing competition, according to family member Will Corporon.

The grandfather died at the scene and the boy died later at a hospital, police said.

The shooter then drove a little more than a mile away to the Village Shalom retirement community and fatally shot 53-year-old Terri LeManno, police said. LeManno was an occupational therapist and married mother of two children and was making a regular visit to her mother who lived at the retirement facility, police said.

It appeared the gunman had used a shotgun and possibly other firearms, police said.

Kaste said the FBI had been aware of Cross and his background but was not monitoring him and had no warnings of the attacks. He said that it did not matter that the victims were not Jewish because hate crime violations are tied to the biases and beliefs of the suspect that motivate the crime, not the identities of the victims.

The Jewish Community Center, known locally as “The J” is a popular recreational and educational spot for many families throughout the area, Jewish or not. It is also the site of Kansas City’s only Jewish community day school, the Hyman Brand Hebrew Academy.

At a vigil held Sunday night, Mindy Corporon, mother of Reat Underwood, said she got to the scene only minutes after the shooting.

“I knew immediately that they were in heaven. I know they are in heaven together,” she said of her son and father.