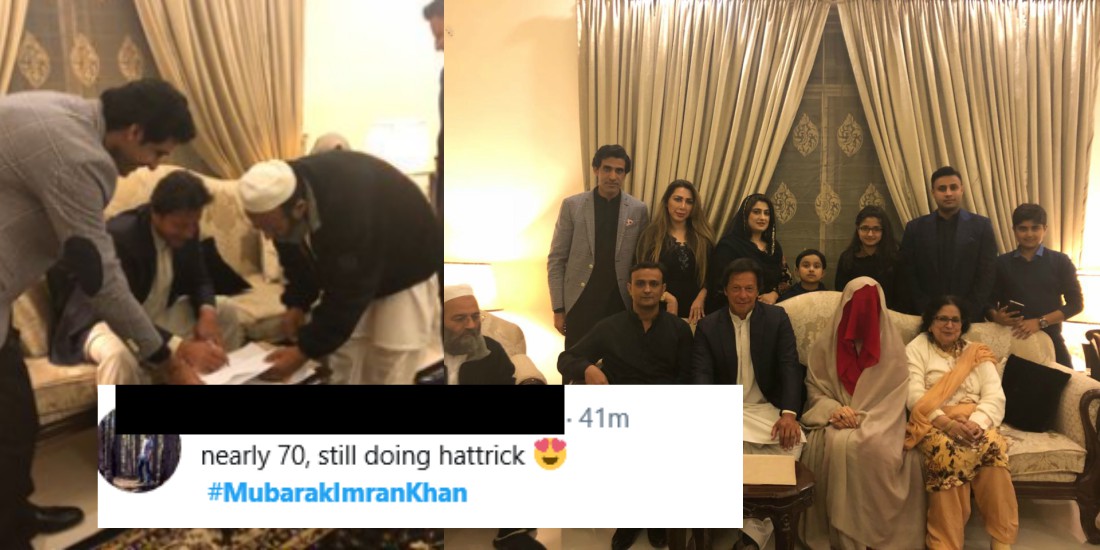 No matter what is going on in the country, everyone’s attention has always been fixed on Imran Khan’s marriage. Our country is no doubt a fan of scrolling through marriage pictures but him being in them, somewhat makes it extra interesting and questionable. Maybe his timings are wrong. Plus, he is for sure is a bad person when it comes to hiding his relationship. Recently, it has been proven yet again as soon as his pictures of Nikkah with Bushra Maneka surfaced the internet.

LOOK HOW HAPPY HE IS!

I congratulate my leader and pray for his happiness on this new journey of his life ! #MubarakImranKhan pic.twitter.com/X7C73QfPho

Since it has been made official, all of the people coming across it were getting crazy. No one could finally believe the news anymore as previously it was shut down by all those who closely know Khan Sahab. Although being smart enough, people never accepted it truly and today, they all have been proven right. Congratulations to all those, firstly. Pakistan Tehreek-i-Insaf was the first one who broke the silence along with proof, that clearly shows that they have both tied the knot.

Fawad Chaudhry the PTI spokesperson revealed more details by saying that the ceremony was held at Maneka’s house. However, only close relatives were invited. The popular slogan now that would definitely beat them all is “My crime is wanting to get married” as he needed personal happiness.

THE NEWS HAS BEEN MADE OFFICIAL

The Nikah happened today, Sunday 18th February at around 9:00 PM in the company of close family and friends.#MubarakImranKhan pic.twitter.com/DJWSMH3O6M

I met Bushra [Maneka] almost two years ago. I will like to reiterate that every time I met her, with family and alone, she has been in purdah. My interest in her lies in the fact that I have not seen or met anyone with her level of spirituality.

It was all over the media that Maneka is divorced so Imran Khan has sent her a proposal for marriage. But the long-awaited reply wasn’t coming until today when she finally said “Qubool Hai”. Being lost and blown away by the news, the audience is in a mind-boggling state where they don’t know if they should first celebrate their sixth sense proving to be right or congratulate Imran Khan. Or, for some, bash him for not getting hitched with Jemima. Here are some of the replies.

CONGRATULATIONS TO THE COUPLE

HAS SHE EVEN CONGRATULATED HIM YET?

Its all started with a hat,then came dupatta and now its a total wrap #MubarakImranKhan pic.twitter.com/Fz3ydO6mdr