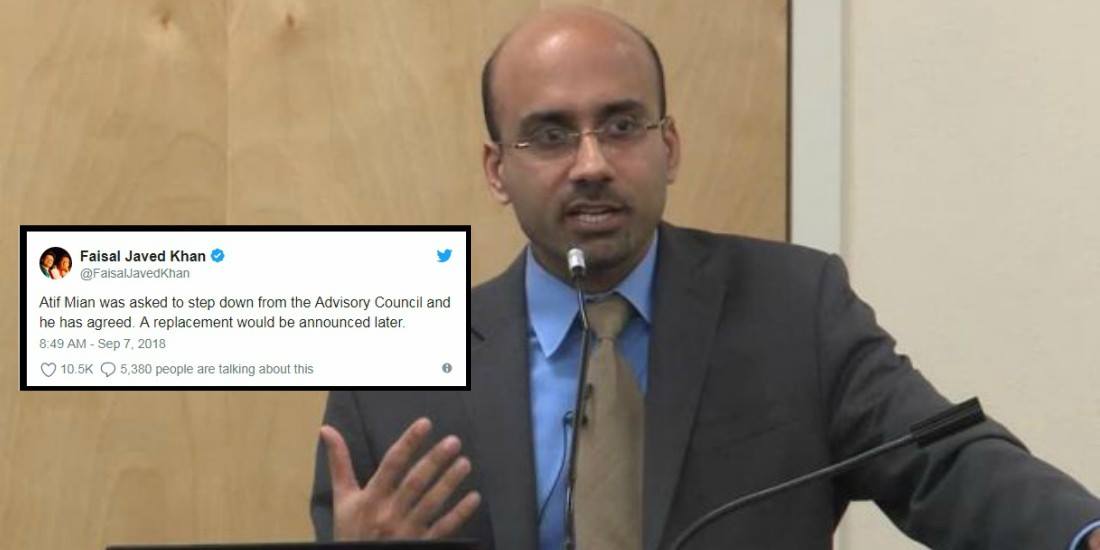 These words hold so much meaning for every Paksitani. After years of corrupt leaders and extremist politcians, we finally got a political party and a leader worth standing for. Or so I thought, until the PTI-Government asked (read: forced) Atif Mian to step down from the Economic Advisory Council because he is an Ahmadi.

When Atif Mian’s appointment was announced, there was a great amount of backlash towards PTI for hiring an Ahmedi. People of Pakistan hate Ahmadis more than they hate anyone else out there. Just because their religious beliefs differ from that of typical Muslims, they have been subject to a great amount of undeserving hatred.

However, PTI responded to the extremists by saying that they would protect minorities and their right to live in Pakistan. That’s what Quaid-e-Azam wanted, right? That’s what the white part of our flag stands for, right?

But this sentiment was short lived. Today, PTI went back on their statement and asked Atif Mian to step down from the EAC. Suddenly, I’m doubting my choice to vote for Imran Khan. Was it the right thing to do? Why is the PTI-Government discriminating between people on the basis of religion? This is not the Naya Pakistan I envisioned.

He is the first person of Pakistani origin to rank among the top 25 young economists of the world.  In 2014, The International Monetary Fund (IMF) identified Atif as one of twenty-five young economists who it expects will shape the world’s thinking about the global economy in the future.

There could literally be no one more qualified for this post in Pakistan. But sadly, the extremist minds in Pakistan have too much power and Atif Mian was forced to step down. Today isn’t just a sad day for Ahmadis. It’s a sad day for all of us, who should be ashamed to call ourselves Pakistani.

This is not the Pakistan that Jinnah wanted. There’s nothing “Naya” about it.

This Pakistani Male Celebrity’s Picture Is Making People Guess Who He Is And They Are SHOCKED!
According To Islam, Here’s What You Need To Know About A Syed’s Marriage With A Non-Syed
To Top