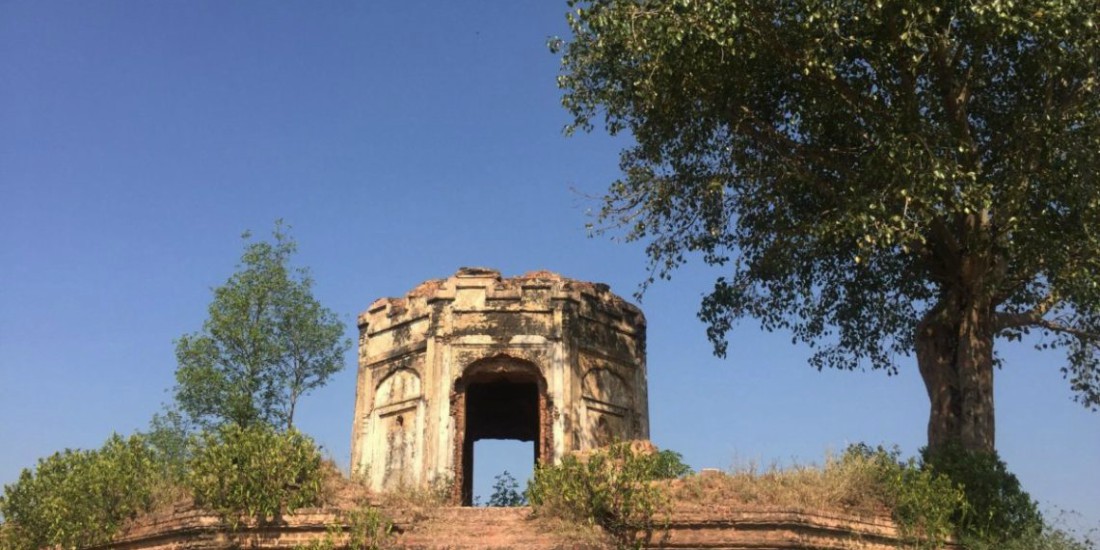 Kurri Shehr was the original Rawalpindi-Islamabad. The present-day Kurri Shehr is a small town 18 km from Islamabad, close to Rawal Lake. It is the oldest trading post of Potohar Region. It was a stopover for caravans coming from Taxila traveling towards Poonch city in Kashmir and Amritsar in Punjab.

Development of this town was heavily supported by Ranjit Singh after his conquest of Rawalpindi from the Gakhars’ in 1814 because of the considerable Sikh population. There were considerable influential Hindus as well. In fact, this town provided the backbone for Rawalpindi’s administration staff. The Deputy Accountant General in nineteen century was from this village, a Hindu by the name of Mr.Dhār. Ranjit Singh supported his Sikh constituency by building a huge dispensary, Dak Bangla, Police Station, irrigation system, watering ponds, schools, a baradari and town Centre.

After the British took over Rawalpindi in 1849, they kept the status quo as far as the Sikh influence was concerned. That meant the Sikh and Hindu residents of Kurri Shehr ruled the roost once again. They now held vast agricultural lands around the village, where Muslim tenants labored. 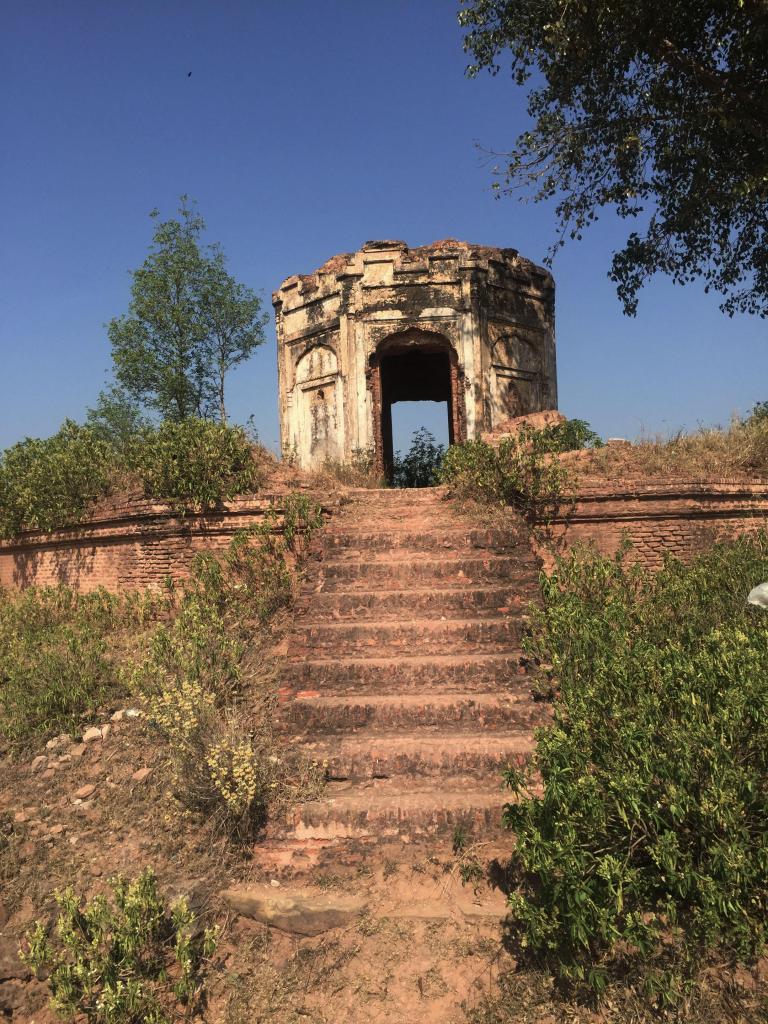 This is what an octogenarian of Kurri told me, “The Hindus and Sikhs dominated trade in the town center, Muslims were nowhere to be seen. They were tall, beautiful, strong, rich and influential. The Muslims were tenants in their lands. No Muslim could come into the town Centre without a headscarf, in deference to the non-Muslim residents.

The burly Singh Brothers (Pehlwans) would beat them up. The Muslims wasted their meager resources in useless ceremonies and were mostly indebted to the Hindus and Sikh traders. Not a single Muslim had a shop here. There was only one way in and one way out of the Town Centre. All the shops were covered and clean”. This was meant to protect the trader class from the uncouth surrounding population; read ‘Muslims’. 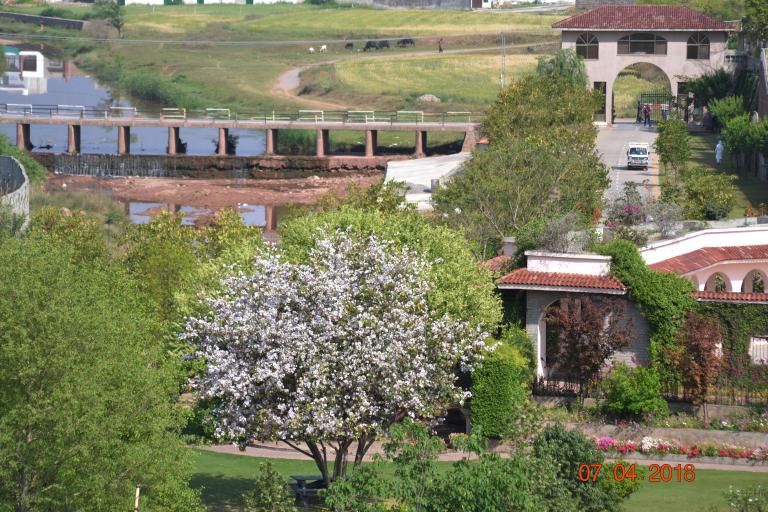 When asked about the religious discrimination he said, “The non-Muslims were ideal neighbors; they would look after poor Muslims and would attend to them when in trouble. They were very caring. My master sahib by the name Chetram was a double MA and B.Ed. He would personally supervise our studies starting from 0400 hrs.

Every morning to 2300 hrs. Until night time, the whole year. Not once did he discriminate between Hindus and Muslims students. My mother studied till grade 9 with a Hindu teacher in 1910. The non-Muslims never tried to keep Muslims uneducated. We just never worked as hard as them.The Anglo (English) medium school was ruined when Hindu teachers left.” 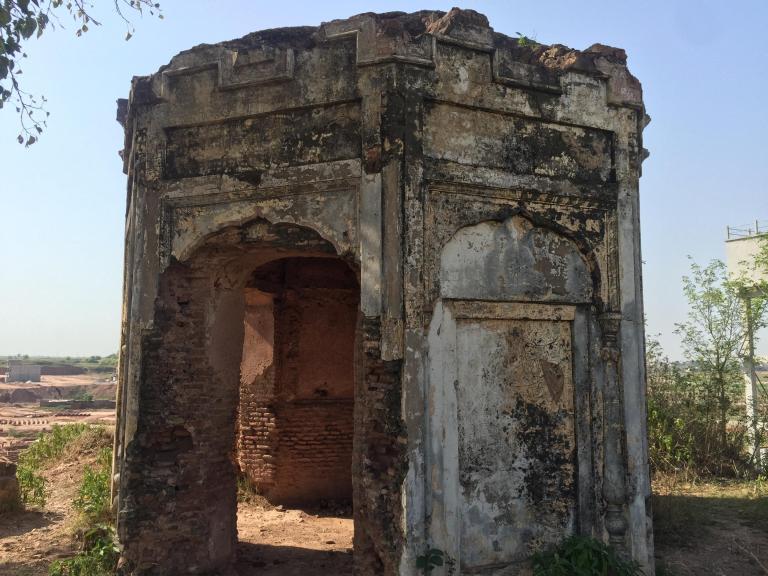 “Arora, Bhagat, Dhar, Pundit Brahmin families lived in this town. The Bara Dari had an annual Besakhi Mela in its compound. Various Pehlwan would come in and show their strength. The several shops surrounding the baradari would preach Sikh religion to the visitors. There was a sacred pond where pilgrims would bathe and chant ‘VaheGuru’ in memory of Guru Nanak”.

That pond, the shops, and compound are long gone, and so are the rest of the Dari (doors), except one. One Bohar (Banyan tree) reminds us of the sacred value of the place. At the corner of the high ground is a sacred well.This baradari had the clear blue water of GumrahKass flowing right in front of it. There were inscriptions in Guru Mukhi on the walls, bearly discernable and an image, probably of Ranjit Singh. 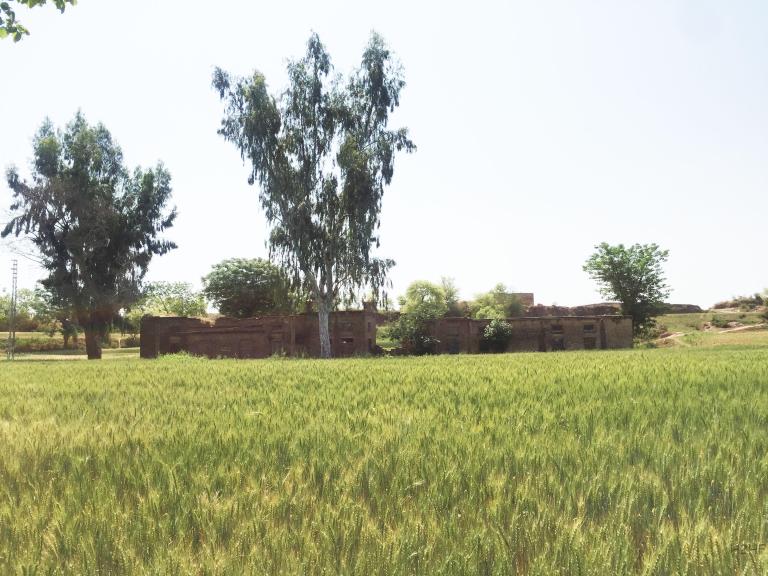 We moved on to the ruins of a Dispensary built by the Sikhs. Considering it was built 100+ years ago, it was quite big. After 1947, the locals scared away the skeleton staff that was left. The watering pond in its foreground was filled over. There were signs of cascading water channels built for controlled irrigation all over the place. No wonder the lush wheat fields were breathtaking.

Then I saw the dreaded trail of death; the narrow walkway that leads from Kurri Shehr to the safety of Tarlai village, another non-Muslim dominated area. 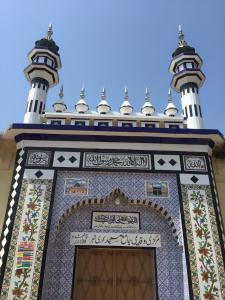 I will quote what the local elder told me about the events of 1947, “After a few houses in Kurri Shehr owned by non-Muslims were raided, looted and inhabitants raped and killed, the scared non-Muslim families would try to escape on this trail, in the cover of darkness. Most of them would be intercepted by dacoits, most of the adjoining villages and would be hacked to death. Their limbs and body parts being left to rot, dogs would drag them into the Town Centre.

On seeing the brutality, we saved a few Hindu ladies in our homes, till their men took them back. The unfortunate ones were dumped in the deep well in the courtyard of the dispensary. The whole Kurri Shehr town Centre was set alight. At least 400 non-Muslims, including my friends Bhola Singh and Ardith Singh, were murdered. When my class fellow Band KishoreDhār visited two decades back, he cried a lot.”

After hearing this I didn’t have the nerve to look too deep into the 19th-century mosque funded by Afghan traders close by. Nothing of the original architecture remains, except a baithak outside the mosque. Rumor has it that Aurangzeb (1618-1707) had this mosque built initially. It had a characteristic Banyan tree as well.

Original Hindu residents of Kurri Shehr have written a book on its history. What I could gather further was that Kurri Shehr also has mentioned in Irani Literature. A little restoration work on the remaining historical sites could make this place a nostalgia pilgrimage site.

On the way back I wondered whether we would have been better off having the educated and entrepreneurial non-Muslim class intact, this side of the border. Is that massacre going to haunt us? Or has it already? A truth and reconciliation commission for those who have been wronged could help mitigate the curse of barbarity.

Read Also: Here’s What This Guy Experienced When He Was Traveling From Rawalpindi To Malot Fort And Dharab Dam

Here Are The Two Places You Should Visit If You Have Decided To Boycott Murree
College Harassment Case: Mother of The Victim Asks College To Take Responsibility Of The Incident
To Top