Gorgeous and talented Esra Bilgic has been the talk of the town since she became a star in the famous Turkish drama series, Ertugrul Ghazi. Since, then the Turkish beauty has been receiving on and off love from Pakistan, for her gracefulness and spot-on acting. In fact, Bilgic is also one of the celebrities that have shared the same sentiments for Pakistan.

Recently, Bilgic shared a business message in Urdu, which hinted towards a possibility that she might be working in Pakistan soon. No sooner than later, we finally saw Bilgic starring as the brand ambassador for Qmobile – a Pakistani smartphone brand. However, many people who contradicted her for working in Pakistan, such as Yasir Hussain, and actress Reema. 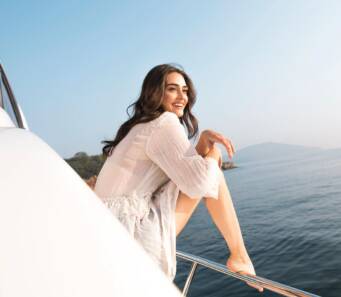 But apart from the negatives, she also received words of encouragement, warm welcomes, and a lot of applause. In fact, many of her fans are excited to finally see her in a Pakistani brand advertisement, for the first time.

Even Bilgic herself feels content and happy to be a part of the Pakistani industry and has mentioned many times about how much she adorns the Pakistani shows and Pakistan as a whole.

Above all, Qmobile is also teasing us with little BTS shots of Esra Bilgic getting ready for her role in the Qmobile smartphone TVC. And to say she looks completely ethereal is an understatement. Don’t believe us? Take a look at it yourself.

So it was indeed quite a dream come true when we heard that this year our Turkish stars will be coming to Pakistan as ambassadors for Peshawar Zalmi for PSL. 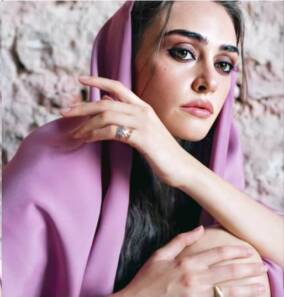 The Turkish beauty with brains

Esra Bilgic is also vocal about the conditions of Kashmir and has more than often mentioned that she wishes to visit the country and help the people. A couple of months back, we also saw how Bilgic schooled Priyanka Chopra; for her anti-humanitarian views about the people in Kashmir.

We are absolutely delighted to have an industry where all-stars from all around the world can openly work. And after seeing this shoot, if possible we are excited to have Esra Bilgic onboard.