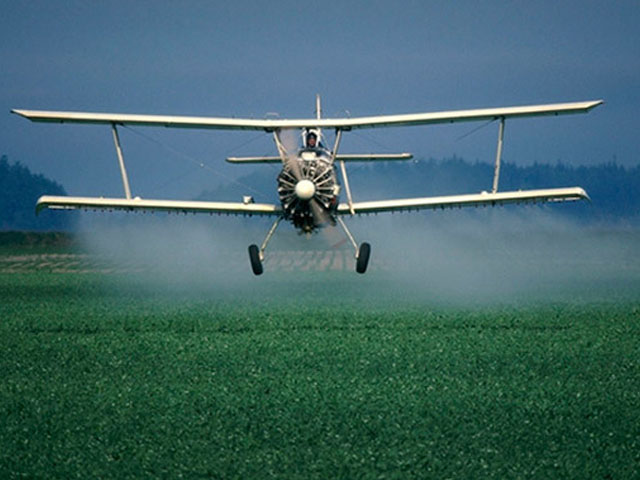 The US Environmental Protection Agency has revealed a proposal for mass use of Dow Chemicalâ€™s herbicide 2,4-D on the companyâ€™s genetically-engineered corn and soybeans. The GE crops were developed to withstand several herbicides, including 2,4-D.

Dow would be allowed to sell the herbicide if the EPA approves it following a 30-day public comment period.

The 2,4-D chemical, combined with glyphosate, makes up the herbicide Enlist Duo. 2,4-D also makes up half of the toxic mix in the now infamous ‘Agent Orange,’ used by the United States during the Vietnam War, which is thought to have resulted in the deaths of an estimated 400,000 people and birth defects in 500,000 others.

Dowâ€™s genetically-engineered corn and soybeans â€“ known as Enlist â€“ have received preliminary approval from the US Department of Agriculture. Should Enlist crops win ultimate authorization, the USDA said that would increase the annual use of 2,4-D (2,4-dichlorophenoxyacetic acid) in the United States from 26 million pounds per year to possibly 176 million pounds.

The crops are designed to withstand high doses of glyphosate â€“ brought to market by biotech giant Monsanto as their Roundup weed killer â€“ and 2,4-D. Dowâ€™s corn and soybeans thus earned the derogatory name ‘Agent Orange’ crops by opponents of both the highly-toxic chemical mix and the controversial use of genetically-modified organisms (GMOs) in large-scale agriculture.

In 2012, seventy health scientists sent a letter to the EPA asking it to block approval of Dowâ€™s 2,4-D-resistant corn and soybeans for commercial sale.

Medical researchers have linked exposure to 2,4-D, and other chemicals like it, to increased rates of cancer, Parkinsonâ€™s disease, endocrine disruption, and low sperm counts, among other conditions. Higher rates of birth anomalies have been found where there is heavy use of 2,4-D.

Health concerns had prompted the Natural Resources Defense Council to petition the EPA to halt use of the herbicide, though that effort was defeated in 2012.

â€œWith this decision it is clear that the EPA is serving the interests of Dow Chemical and the biotech industry rather than protecting our health and the environment,â€ said Andrew Kimbrell, executive director of the Center for Food Safety.

In an agribusiness chemical arms race, Dowâ€™s development of 2,4-D-resistant crops came about once first-generation genetically-modified crops made by Monsanto evolved to resist the companyâ€™s Roundup herbicide. The flood of new GE crops increased the use of glyphosate, which has its own links to a host of ill health effects, and glyphosate-resistant â€œsuperweeds.â€

â€œ2,4-D is not a solution to glyphosate-resistant weeds,â€ Kimbrell said. â€œWeeds will rapidly evolve resistance to 2,4-D as well if these crops are approved, driving a toxic spiral of ever-increasing herbicide use. Dowâ€™s Enlist crops are a textbook example of unsustainable farming, profiting pesticide companies to the detriment of American farmers, public health and the environment.â€

Nevertheless, Dow maintains that farmers need an answer for â€œhard to controlâ€ weeds.

â€œEnlist Duo herbicide will help solve the weed control challenges growers are facing, and will be another option to further reduce the potential for development of herbicide-resistant weeds,â€ said Damon Palmer of Dow AgroSciences, a subsidy of Dow Chemical Company.