The government has initiated the Ehsaas program to help to counter poverty in the country. Amid the crises of coronavirus, the program of poverty alleviation is going in on in the country. However, a viral video depicts a grieved old man, who was rejected and had not been provided with the Ehsas program fund.

The viral depicts, the old man saying that because his fingerprints have gone due to his age this why he cannot be provided with the cash under the Ehsas scheme.

The old man said, “My fingerprints have gone but today after 78 years it feels as if my presence has also perished.”

“I got a message from the Ehsaas program and decided to go collect my money. However, I cannot receive cash because my fingerprints have gone. I went on to many places but failed to get money; then I came to Noor Mohammad High school here I also got the same message of fingerprints.” 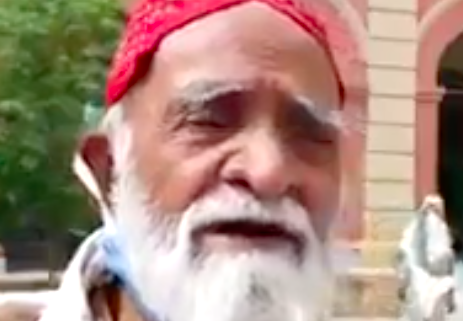 “Who will prove that I’m alive?” He asked. Further stating: “Has my life ended just because my fingerprints are not there?” He said, “if you don’t want to give money then don’t but do something for thousands of people like me will they also be considered dead because of their finger impressions?” “I have even ignored the precautions of corona due to the hunger,” he added.

According to Prime Minster’s Ehsaas Cash policy statement, it is the program of welfare.

“Ehsaas is about the creation of a ‘welfare state’ by countering elite capture and leveraging 21st-century tools—such as using data and technology to create precision safety nets; promoting financial inclusion and access to digital services; supporting the economic empowerment of women; focusing on the central role of human capital formation for poverty eradication, economic growth, and sustainable development; and overcoming financial barriers to accessing health and post-secondary education.”

“The program is for the extreme poor, orphans, widows, the homeless, the disabled, those who risk medical impoverishment, for the jobless, for poor farmers, for laborers, for the sick and undernourished; for students from low-income backgrounds and for poor women and elderly citizens. This plan is also about lifting lagging areas where poverty is higher.”

According to the data shared by Sania Nishtar, till April 20, around 55.039 billion has been distributed under Ehsaas Emergency cash.

As of yesterday, Rs. 55.039 billion #EhsaasEmergencyCash has been disbursed to 4.586 million marginalized families. pic.twitter.com/LGMpemyCLf

Notwithstanding in the data, the real indigents are not present due to the perishment of their finger imprints.

The Pm Statment reads, “The program is for the extreme poor, orphans, widows, the homeless, the disabled.” Nevertheless, the program failed to develop a mechanism for those who cannot reach centers. Furthermore, the administration also failed in creating a strategy for those whose fingerprints have perished.

Besides, most of the economy of Pakistan is informal. Many daily wagers who are struggling amid these crises are not even registered. Therefore, it is quite unfortunate for the impoverished beings of the country.

“Pray Tahajjud Instead Of Taraweeh This Year Due To COVID-19,” Says Cleric
6 Viral Social Media Challenges Keeping People Occupied During Lockdown
To Top