Right after facing backlash, Ducky Bhai also known as Saad-Ur-Rehman was forced to feed upon his own ego and apologize to poor Maryam after he threats her for celebrating Independence Day with her pet dog. Even though the controversial YouTuber was forced to apologize, his fans didn’t spare Maryam, the girl who was continuously abused by Ducky Bhai.

Ducky Bhai from trolling her and giving her threats to calling her a ‘feminist’ as if that is a bad word, the poor girl Maryam was harassed for being insensitive, and disrespectful about her country. Although, she clarified her stance and informed all that were trolling her, that she is apologetic if she hurt anyone’s feelings. 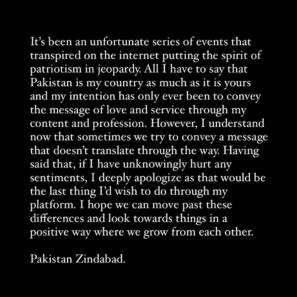 However, she was only celebrating the day with her dog, who is like a family member. Besides isn’t it common in the world to dress up pet animals according to the public holidays? Maryam is still under fire for being a bit too patriotic with her dog.

Of course we thought, things might dissolve down after Ducky Bhai apologized also. However, it seems they might have turned worse than they were before. Maryam took to social media to share with her followers the horrific incident that took place with her. She also mentions that she can’t wait to leave Pakistan, for studies abroad.

It’s done with. All I want to say is I cannot wait until I complete medicine and move out of this country because I cannot even express the love for my country in my own way here.

However, if one might have thought that would end the dilemma it didn’t if anything it only increased the pressure this poor girl was going through. People started to troll her for being disloyal to her country. It is like nothing can make this netizens happy can it?

The way i interpret this tweet is that I don't want to live in this country bcz its such a backforward and extremist country. But hey, i'll get my education here , i'll hold a green passport(which i'll try to get rid of asap) and then go on to serve a foreign country

Simultaneously, she responded by informing them, that she has been receiving continuous death threats since Ducky Bhai negatively propagated her and abused her on Twitter.

Many of you seemed to have a problem with me saying I can’t wait to move out but I’m receiving countless messages like these even after taking it down and apologizing. When influencers incite hostile threats and petty smear campaigns, you can only predict what the masses follow. pic.twitter.com/32EeczdNKp

Maryam adds a spam cryptic message that she received, where the man not only uses abusive language, rather he uses this opportunity to threaten her life for it. It is truly sad to see to what level we have stooped to.

Right after she shared this bizarre experience many people have come to her aid.

Exactly what Sameer. Try reporting this to FIA or resolve it with any links if you have.

Some even suggested that she report the accounts to FIA and cyber crime for their ill-treatment and abuse.

Many are even questioning Ducky Bhai to take responsibility for his misjudgment and actions. If it weren’t for his ill-minded and impulsive perspective, Maryam wouldn’t be abused and harassed as much.

@duckybhai will you take responsibility for these death threats because your platform blew things out of proportion and led to this?

Well, he must! All in all, the situation seems quite critical and bizarre at the moment. We hope and pray that Maryam is able to come out of this trauma and the abusers are handled well by the FIA and Cybercrime department of Pakistan. In addition, we also pray that Ducky Bhai is more mature and practical in the future when it comes to respecting women and criticizing someone.

This Ertugrul-Style Wedding In Pakistan Is Taking Love For The Kayi Tribe To The Next-Level
Is Shireen Mazari Replacing Shah Mehmood Qureshi As FM After He Irked Saudi Arabia?
To Top