Meet Dua Khan And Her Mother Who Runs A Shawarma Stall In Lahore And This Is Extremely Inspiring!

Pakistan’s culture has set certain rules and standard for women. It’s as if the culture was tailored meticulously to suffocate women and the society followed suit. Each and everything women do is judged on the scales of honor and dignity. Let’s face it, there aren’t many options left for women, since, if not everything than most have been ticked off as unsuitable or undignified.

Stepping out of the house to earn a living for instance, for the longest of time, was looked down upon. When it did finally become normal, the men outside on the streets made it hard for them to travel in peace and security. Why do Pakistanis have such a regressive mentality? Why do they make it hard for women to survive in this country instead of easing their process along with assisting them?

Two brave and courageous women struck by poverty run a burger and shawarma stall at the side of the street to support their house. This particular story from the city of Lahore is uplifting and infuriating at the same time. How? Read away.

Meet Dua Khan – A Daughter, A Sister, And A Breadwinner Who Runs A Shawarma Stall. 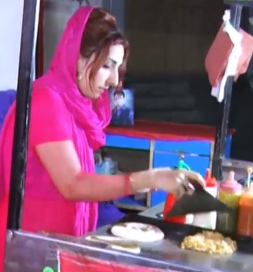 When Dua is interviewed, she is clearly distressed and communicates quite openly. But the details of her ordeal are upsetting. She explains crying that the police and the general public taunts her for the work she does by passing filthy remarks. The stress of being looked down upon got to her to the point that she felt the need to justify her choice to stand behind a stall and sell shawarmas.

Where other Muslim countries have women working all kinds of jobs, Pakistan is several years behind. Take Malaysia for example, where women are seen running every kind of stalls and it’s absolutely normal there. They are respected and dealt with like any other vendor. Sadly in our community, Dua’s hard work and determination is overshadowed by the judgemental eyes of our people. This community has failed our independent, strong-willed and unshakable women.

Dua Khan Doesn’t Plan On Giving Up, With Her Mother On Her Side She Will Conquer All Obstacles.

They don’t need to create an example of bravery and perseverance for all other women out there. They already achieved that! We hope they continue on and find a lot of success along the way.