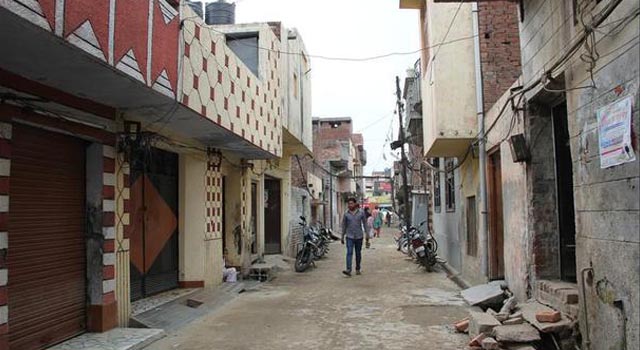 Maqboolpura, Punjab – When it comes to the “drug hurricane” lashing Punjab at a huge social cost, politics may not be part of the solution – but part of the problem.

Damning claims that link politicians themselves to the trafficking of drugs have been voiced on the eve of elections as parties publicly promise action against the trade.

Addicts and former police officers have confirmed widespread ties between political activists and drug-peddling in the state, vindicating claims made by its former Director General of Police Shashi Kant.

Speaking from a remote village in Bhatinda, Shashi Kant said: “As additional director general of police (Intelligence) I had submitted a report with a list of sitting various ministers and MLAs of all political parties who are profiting from this dark enterprise.

We donâ€™t make enough money. The easiest way is to join hands with those involved in nasha taskari (drug smuggling). We lease our land for a sum and become couriers.

“A single day of full-fledged campaigning costs several lakhs [about $1,655] per day. None of these politicians have sold their properties, how do you think they are getting money to lure voters?

“A part of what they earn through drugs sales goes into election campaigns and part of it is used to buy more drugs. It’s a vicious circle.”

The scale of drug abuse in the state became public in 2009 through a submission to the Punjab and Haryana High Court by Harjit Singh, secretary of the department of social security and women and child development in Chandigarh.

Singh said more than two thirds of the stateâ€™s rural household has at least one drug addict â€“ a proportion that in 2014 may now be even higher. Today an estimated 66 per cent of Punjabâ€™s youths are thought to be taking medical or synthetic drugs.

He wrote: “The vibrancy of Punjab is virtually a myth. Many sell their blood to procure their daily doze of deadly drugs, even beg on streets for money to continue their addiction.

“The entire Punjab is in the grip of drug hurricane which weakens the morale, physique and character of the youth. We are in the danger of losing the young generation.”

‘Village of widows and orphans’

Just 2km from the centre of Amritsar, home to the Golden Temple, is Maqboolpura, a closely packed settlement where flies, muck and night soil fill the gutters.

Notorious as a haven for criminals, what makes Maqboolpura more infamous today is that every household in this neighbourhood houses a drug addict’s widow or orphans – earning it the nickname, “Village of widows and orphans.”

There are active drug addicts in at least 384 families in the neighbourhood and nearly 100 local boys are currently held in Amritsar Central Jail on drugs related cases.

“Drugs have killed many across the state of Punjab, except that in Maqboolpura the problem is marked,” said Master Ajit, who runs a school for the orphans of drug addicts.

Taking shelter on a garbage dump, a group of teenage boys share a Bhooki, a cigarette rolled with poppy husk seeds, while listening to Punjabi songs.

One hesitantly told Al Jazeera: “It’s not difficult to get nasha (drugs) here. We use code words like badam (almonds) or nuts.”

The youth claimed that he could easily obtain injections and even ice (crystal meth) from a local chemist shop.

Moreover, if the word on the street is to be believed, then this election season addicts won’t have to go and buy their drugs – they will be brought to them.

In the first 40 days of campaigning for the 30 April poll, the Election Commission seized 136kg of heroin, 14,823kg of poppy husk, 76.2kg of opium and 47kg of cannabis as well as a huge haul of illicit liquor.

“Why should it surprise you?” a state intelligence department official, who has been tasked with taking notes at political events in Amritsar, said.

Harwandir Singh, a former addict from Binjal village who first tasted drugs at school and is now undergoing rehabilitation at the Grow Foundation centre in Punjab, is unwilling to return home during the elections and made a shocking allegation.

Sitting on the centre’s porch after classes, Harwinder explained: “I have come out of this with great difficulty. In villages drugs consumption is rampant. Especially during elections: the main workers of political parties gather together young boys at a farm and distribute contraband freely.

“You name it and they will give it – no matter how expensive it is,” he said.

His friend at the centre, Joginder Singh, echoes his apprehension about returning home during election season.

Across Punjab there are 63 licensed private drug counselling and rehabilitation centres â€“ which have seen a 20 per cent rise in the number of addicts seeking help in recent years â€“ and only 10 government counterparts.

“But in a state which has millions of drug addicts there is an acute shortage of de-addiction and rehabilitation centres,” Amanjeet Singh, president of the Punjab State Drug Counselling and Rehabilitation Centres Union, said.

Drug abuse in Punjab owes much to the state’s declining agricultural economy, growing unemployment, the travails of rural life and Punjabi machismo.

Rahul Advani of the Institute of South Asian Studies says: “It may be the clash between unemployment and the culture of aspiration that exists among the many affluent young men in rural Punjab who are at the centre of the problem.”

According to the 2009 Punjab government affidavit, the use of alcohol and drugs has become a part of culture in the state.

However, in the last two decades, the pattern of drug use has undergone a change in favour of new narcotic and synthetic drugs, with addicts now consuming multiple drugs.

In official documents agencies in drug cases being investigated or pending trial in local courts accuse Pakistan of playing a key role.

Most cases have revealed a similar modus operandi among smugglers in both Pakistan and India of supplying and receiving consignments through border villages.

“As the fence is electrified, smugglers use a large and long plastic pipe to drop the narcotics. The packets are inserted from Pakistan side and received on the Indian side by the smugglers,” reads one statement to the local police in the Tarn Taran border district.

A farmer from the same area, on the condition of anonymity, said: “We donâ€™t make enough money. The easiest way is to join hands with those involved in nasha taskari (drug smuggling). We lease our land for a sum and become couriers.”

In December last year, Jagdish Bhola, a suspended deputy superintendent of police accused of drug trafficking, revealed as he was being escorted in handcuffs from a court hearing in Mohali: “I am just a pawn in the hierarchy of drug trade in the state – the real kingpins are politicians.”

Based on Bhola’s revelations, police arrested a hotelier, Maninder Singh Aulakh – a local treasurer and election organiser for the ruling Shiromani Akali Dal party – and a business associate from neighbouring Himachal Pradesh, Jagjit Singh Chahal, who has also been linked to Akali leaders.

Aulakh is said to be close to senior Akali legislators and allegedly used government vehicles to smuggle the synthetic drugs.

The allegations reinforce those made in 2012 by another drug lord, Raja Kandola, who put politicians – and the Punjabi police themselves – in the dock by accusing them of conniving with drug lords.

Lack of political will

Yet despite these allegations, as the polls approach in Punjab it is the depiction of drugs as a menace that reverberates throughout the speeches given by politicians promising action at rallies and public meetings.

At every public meeting Congress party candidate Amarinder Singh has named “Majithia as the conduit between state drug traffickers and those settled abroad (sic Pakistan).”

His BJP rival Arun Jaitley has often repeated that “the borders have to be sealed to make it impossible for anyone to smuggle drugs.”

Others even advocate the open – but licensed – sale of poppy husks in the state as a way of addressing the problem.

In a recently held public meeting in Jaitu constituency, Paramjit Kaur Gulshan – a sitting MP from Faridkot, reportedly told residents: “Since there is a lot of demand to make poppy husk available to villages illegally, the MLAs and I have personally suggested to the chief minister to look into this demand.”

Nonetheless, and perhaps not surprisingly, drug abuse does not find any mention in any of the manifestos being distributed by most of the political parties – and many voters believe there is insufficient political will to tackle this scourge.