This Woman Was Allegedly Hit By An Aunty And Her Son In Nueplex Cinema, Karachi And She Wants It Known!

In this digital day and age, nothing can be concealed. Everything and anything can be recorded and kept as proof or for purposes that are unholy and evil.

Most of the times, we come across videos of intense arguments that escalate into fist-fights or worse into an accidental life taking incident. Just like the rest of the world, Pakistan too has a record of public fights, group brawls that is mostly among men. The Pakistani women however rarely fight in public out of fear of creating a scene. However, journalist Uzma Tahir posted videos claiming she and her family were approached violently by a woman and her son who thought they were being recorded.

Both included mainly women and one definitely seemed to be at the offense, considering the content of the video. Apparently, it can clearly be seen that the lady was recording her family, only. However, another woman passing by thinking she is recording everyone inquired and asked her to show the video. It can clearly be heard that she agrees to it.

This is where it cuts off and what happened next is unknown. However, it is clear that a heated argument took place as the original author who narrated the incident on Facebook mentions how the lady rudely pushed her saying, “Media people are like this”.

This Is The Video That She Was Recording Which Does Involve Her Family Only:

Uzma Tahir is the name of the original author who continues to tell what her family had to go through at the hands of this woman and her son. According to her, the mother-son duo pounced on them and her son clad in black shalwar kameez, not only snatched the phone from her but went as far as ripping her sister’s shirt.

The Reference Video Is Attached Below:

Later Uzma says that knowing they were recorded, they apologized and requested her to delete their video. Woah! This was definitely messier than the omelet I make. Talk about prolonged drama, this is it. 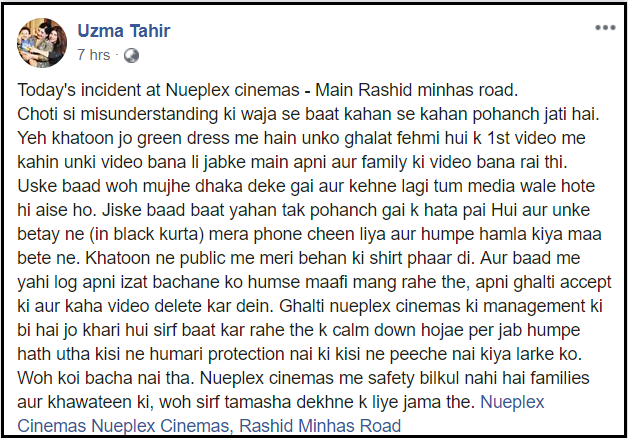 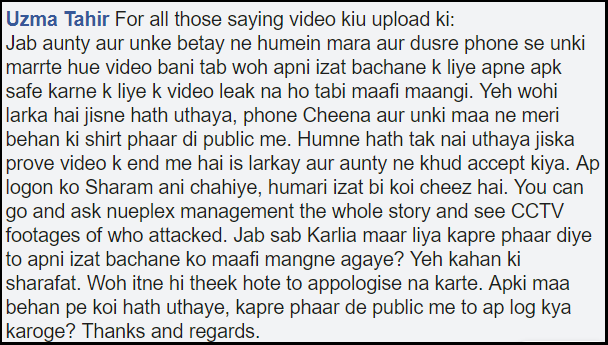 That’s all folks! Phew. So whatever material that is in front of you, what do you think of all this? Let us know in the comment section below!

Public Service Message: Don’t try to act cocky or arrogant. Resolve conflict within the boundaries of respect and compassion.

Eoin Morgan Saying ‘Allah Was With Us’ On Winning The Cricket World Cup Has Definitely Won The Hearts Of Many!
Adil Rashid And Moeen Ali’s Exit From England’s ‘Champagne’ Celebration Is Calling For True Muslim Spirit!
To Top