Dr. Nimrita's Death Is An Eye-Opener For Female Hostel Students In Pakistan

Recently, a case so brutal emerged from the interior of Sindh, that it has shaken Pakistanis into oblivion. Yes, we’re talking about Dr. Nimrita Chandani’s brutal rape and murder inside her hostel in Larkana, Sindh.

A couple of days back, Dr. Nimrita’s autopsy report proved that the young dental student was raped and murdered. This news shunned all rumors of potential suicide, as it had been portrayed. With the autopsy report out, only the culprits are left to be prosecuted.

All that kept aside, did we, even for a second, judge the harsh nature of the incident? To put it into perspective, a young female student who aspired to be a dentist was raped and murdered inside her own hostel room. Dr. Nimrita was a final year dental student at the Bibi Aseefa Dental College in Larkana.

What does this mean for young girls who aspire to become professionals, working in their respective fields? Dr. Nimrita Chandani was a happy-go-lucky girl, full of life, just as her family has said. How can a girl go through such an atrocious ending inside the safety of her own room? That too, inside an official girl’s hostel. 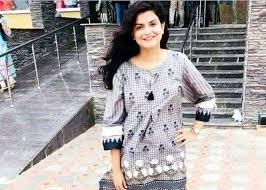 Furthermore, what’s even worse is that once the news was out, different people tried to cover their tracks. Dr. Nimrita’s death was labeled as a suicide when her brother claims she was one of the strongest people he knew.

Tragedy to cover a tragedy? This is Pakistan. In order to hide their incompetence, officials labeled their negligences in the guise of the suicide of a young girl who only wanted to thrive professionally.

It is time to reiterate our initial thought, though. What does this particular case mean to young girls who have been fighting their families for education? Everyone talks about breaking the patriarchy, but can it be rhymed with reason when such incidents prevail?

How many parents who know about Dr. Nimrita’s rape and murder inside her hostel room, will let their daughters go away from the comfort of their houses for education? How many will trust the system and the monsters that overlook it? Why should they? Since no one is ready to take responsibility for such a heinous act being committed under their ‘watchful’ eyes, more Dr. Nimritas will face a similar fate in the future.

Moreover, with the culprits still unidentified and not prosecuted, our voices haven’t been loud enough. Dr. Nimrita might be resting in peace, but her brutal and tragic death has shaken thousands of girls across Pakistan who continue to live in hostels for the sake of education.

Last but not least, this incident definitely serves as an eye-opener for thousands of female students across the country. Should these girls dream of a life full of professional opportunities or should they dream of just staying alive? As long as Dr. Nimrita’s culprits aren’t brought to justice, every girl living inside a hostel will think twice when there’s a knock on her door.

Azadi March Issue To Be Solved Through Reconciliation – PM Imran Khan!
People Are Offended By This ‘Gulaab Jaman Pizza’ Being Sold In Pakistan!
To Top