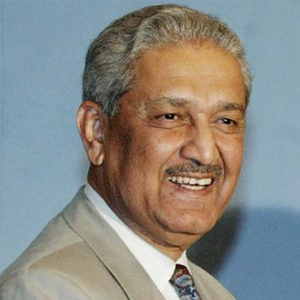 In 1947, during Abdul Qadeer Khan’s childhood, India achieved independence from Britain, and Indians areas in the east and west were partitioned to form the state of Pakistan. Abdul Qadeer Khan immigrated to West Pakistan in 1952, and in 1960 he graduated from the University of Karachi with a degree in metallurgy. Over the next period, he followed graduate studies abroad, first in West Berlin and then in Delft, Netherlands, wherein 1967 he received a master’s degree in metallurgy. In 1972 he received a doctorate in metallurgical engineering from the Catholic University of Leuven in Belgium. Meanwhile, in 1964 he wedded Hendrina Reterink, a British national born to Dutch expatriate parents in South Africa and raised in Northern Rhodesia (now Zambia) before moving to the Netherlands.

In 1972, Abdul Qadeer Khan was appointed by Physical Dynamics Research Laboratory, a subcontractor of the Dutch partner of URENCO. URENCO, a consortium of British, German, and Dutch companies, was established in 1971 to research and develop uranium enrichment over ultracentrifuges, which operate at too high speeds. Abdul Qadeer Khan was arranged a low-level security clearance, but, through lax oversight, he expanded access to a full range of information on ultracentrifuge technology and visited the Dutch plant at Almelo many times. One of his jobs was to translate German documents on advanced centrifuges into Dutch.

He immigrated with his family to Pakistan in 1947. After studying at St. Anthony’s High School, Khan joined the D. J. Science College of Karachi, where he took physics and mathematics. His teacher at the college was famous solar physicist Dr. Bashir Syed. Khan earned a B.Sc. degree in physical metallurgy at the University of Karachi in 1960.

Khan accepted a job as an inspector of weight and measures in Karachi after graduation. He later resigned and went to work in the Netherlands in the 1970s. Khan gained fame as a talented scientist at the nuclear plant he worked in. He had special access to the most restricted areas of the URENCO facility. He could also read the secret documentation on the gas centrifuge technology.

In December 1974, he returned to Pakistan and tried to convince the Prime Minister, Zulfikar Ali Bhutto, to adopt his Uranium route rather than the Plutonium route in structuring nuclear weapons. According to media reports, A.Q. Khan had a close and cordial relationship with President General Mohammad Zia-ul-Haq and the Military of Pakistan. He also maintained a close relationship with the Pakistan Air Force.

On the 22nd of August 2006, the Pakistani government declared that Khan had been diagnosed with prostate cancer and was undergoing treatment. He was released from house arrest in February 2009.

A Letter To The Prime Minister

Abdul Qadeer Khan was deeply influenced by events back home, particularly Pakistan’s humiliating defeat in a 1971 war with India, the subsequent loss of East Pakistan through creating their own new independent country called Bangladesh now, and India’s test of a nuclear explosive device in May 1974.

On 17th September 1974, Abdul Qadeer Khan wrote to Pakistan’s prime minister, Zulfikar Ali Bhutto, offering his assistance in formulating an atomic bomb. In his letter, he offered the opinion that the uranium course to the bomb, using centrifuges for enrichment, was better than the plutonium route (already underway in Pakistan), which relied on nuclear reactors reprocessing.

Bhutto met Abdul Qadeer Khan in December 1974 and encouraged him to do everything he could do to help Pakistan attain the atomic bomb. Over the next year, Abdul Qadeer Khan gets the drawings of centrifuges and assembled a list of mainly European suppliers where parts could be procured. On 15th December 1975, he left the Netherlands for Pakistan, accompanied by his wife and two daughters and carrying the blueprint copies and suppliers list.

Abdul Qadeer Khan initially worked with the Pakistan Atomic Energy Commission (PAEC), but differences arose with its head, Munir Ahmad Khan. In mid-1976, at Bhutto’s direction, Abdul Qadeer Khan founded the Engineering Research Laboratory, or ERL, to develop a uranium-enrichment capability. (In May 1981, the laboratory was renamed the Khan Research Laboratory or KRL.) Abdul Qadeer Khan’s base of operations was in Kahuta, 50 km (30 miles) southeast of Islamabad; there, he developed prototype centrifuges based on German designs and used his supplier’s list to import essential components from Swiss, Dutch, British, and German companies, amongst others.

In the 1980s first half, Pakistan acquired from China the blueprints of a nuclear weapon that used a uranium implosion design that the Chinese had effectively tested in 1966. It is generally thought that the Chinese tried a Pakistanis derivative method on May 26, 1990. Abdul Qadeer Khan, having satisfied Pakistan’s needs for its own uranium weapon, began in the mid-1980s to make front companies in Dubayy, Malaysia, and elsewhere. Through these entities, he covertly sold or traded centrifuges, components, designs, and expertise in an extensive black-market network. The customers involved Iran, which went on to build a uranium-enrichment complex based on the Pakistani model. Abdul Qadeer Khan visited North Korea at least 13 times and is suspected of having transferred enrichment technology to that country. (His laboratory also developed Pakistan’s Ghauri ballistic missile with help from the North Koreans.) Libya, supplied by Abdul Qadeer Khan, boarded upon a nuclear weapons program until it was disturbed by the United States in 2003.

On January 31, 2004, Abdul Qadeer Khan was arrested for transferring nuclear technology to other nations. On the 4th of February, he read a statement on Pakistani television taking full responsibility for his operations and absolving the military and government of any involvement—a claim that many nuclear experts found difficult to believe. The next day he was pardoned by Pakistan’s president, Pervez Musharraf, but he was held under house arrest until 2009. Khan’s critics, particularly in the West, expressed dismay at such lenient treatment of a man whom one observer called “the greatest nuclear proliferator of all time.” For many Pakistanis, however, Khan remains a symbol of pride, a hero whose contribution strengthened Pakistan’s national security against India.

Even with his controversial career, most Pakistanis consider Abdul Qadeer Khan as a national hero who makes extraordinary advancements in science, technology, and security in Pakistan. Abdul Qadeer Khan has also received a tremendous number of awards, including

Throughout his time in the atomic bomb project, Abdul Qadeer Khan established research in the Thermal Quantum Field Theory and Condensed Matter Physics. At the same time, he co-authored articles on chemical reactions of the volatile isotope particles in the controlled physical system. He preserves his standpoint on using controversial technological solutions to military and civilian problems, together with the use of military technologies for civilian welfare. Abdul Qadeer Khan also remained a vigorous advocate for a nuclear analysis program and defense strength through atomic weapons. He has justified Pakistan’s nuclear prevention program as sparing his country the fortune of Iraq or Libya. In 2011 on an interview, Abdul Qadeer Khan kept his point of view on peace through strength and vigorously defended the nuclear weapons program as part of the deterrence policy:

“[P]akistan’s motivation for nuclear weapons arose from a need to prevent “nuclear blackmail” by India. Had Iraq and Libya been nuclear powers, they wouldn’t have been destroyed in the way we have seen recently… If (Pakistan) had a [atomic] capability before 1971, we [Pakistanis] would not have lost half of our country after a disgraceful defeat.”

In his effort on the nuclear weapons program and ahead, Abdul Qadeer Khan encountered heated and intense criticism from his colleague theorists, particularly Pervez Hoodbhoy who opposed his scientific understanding in quantum physics. Also, Abdul Qadeer Khan’s wrong claims that he was the “father” of the atomic bomb project since its beginning, and his personal attacks on Munir Ahmad Khan caused even more hatred from his colleague theorists.  And particularly within the general physics community, such as the Pakistan Physics Society.

Despite the proliferation controversy and his volatile personality, Abdul Qadeer Khan remains a popular public figure and has been a symbol of national pride with many in Pakistan who see him as a national hero. In Pakistani news media and foreign media outlets, Abdul Qadeer Khan has been depicted as Pakistan’s own Dr. Strangelove (commonly referred to as Edward Teller) in Stanley Kubrick’s 1964 satirical film of the same name. While Khan has been awarded many medals and honors by the federal government and universities in Pakistan, Abdul Qadeer Khan also remains the only Pakistan citizen honored twice with Nishan-e-Imtiaz.

Abdul Qadeer Khan is also an essential character in establishing numerous engineering institutions of higher education in Pakistan. He introduced the metallurgy and material science field in Ghulam Ishaq Khan Institute of Engineering Sciences and Technology. ‘Dr. A. Q. Khan Department of Metallurgical Engineering and Material Sciences’ named in his honor, is where Abdul Qadeer Khan served as both executive and director. Another school, another courtesy is ‘Dr. A. Q. Khan Institute of Biotechnology and Genetic Engineering’ at Karachi University has also been named in his honor. Abdul Qadeer Khan has undoubtedly played a vital role in bringing metallurgical engineering courses to your various Pakistan universities.

Regardless of his internationally portrayed image, Abdul Qadeer Khan will always remain widely popular among Pakistanis. He has a differently respected place in every Pakistani’s heart and is considered nationally one of the most influential and valued scientists in Pakistan.