Bakra Eid 2020 is right around the corner and purchase and sales of sacrificial animals are going at full speed. In fact, many people are also showing off their recent buys by having people around. Although, each year sacrificial animals are bought and many people even take care of them, sometimes the threat of natural things can make the lives of these poor animals even more difficult.

A disturbing incident took place in Gadap Town recently. It can be seen in a viral video, a sacrificial goat being brutally attacked by a pack of stray dogs. They attacked the poor animal while it tried to protect itself from the canines.

In addition, the goat’s hind leg got broken in the accident and it received injuries on its neck also. This isn’t the first time a dog attack has taken place in the locality. According to reports, frequent dog bite cases have been reported.

It is also tragic to see that despite the threat of stray dogs, the owner of the stray animal would show such negligence.

Although, the main importance of Bakra Eid is based on the remembrance of the great sacrifice by Prophet Ibrahim (A.S.) and his son Prophet Ismail (A.S.). It is crucial to take care of the sacrificial animals also. In fact, this year we even got to see a 21-year old girl taking care of the animals; that she was setting up for sale at the cattle market. 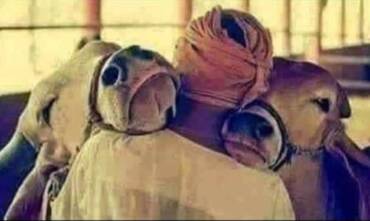 Islam and the importance of taking care of animals

According to Islamic practices, it is important that the animal must be treated with love and care. As a matter of fact, even Allah (SWT) says that all HIS creation be loved and cared for accordingly.

As a matter of fact, even during the sacrifice, each animal must be well treated. There are certain guidelines that a Muslim must follow before he sacrifices his animal on Bakra Eid. There are so many incidents where we see the poor lives of these animals at risk.

We hope some action can be taken immediately regarding the awful accident and the pack of stray dogs be rescued by an animal shelter; so that lives of more people can be protected from this awful incident from occurring again.

WATCH: Two Women Misbehaving With Police Officers & Allegedly Assaulting Them In Karachi
‘Aur Karachi Phir Doob Gaya’ After Another Rain Spell – Forget Your Cars, Bring Out The Boats
To Top