A few days ago, young doctors in Quetta protested against the dearth of Personal Protective Equipment (PPE). Lately, the police arrested the doctors and their action was criticized on social media platforms. Nevertheless, the other side of the picture depicts a different story. The protesting doctors had first actually incited the police after which action was taken to suppress them.

A video on Facebook depicts how the police officials were trying to peacefully stop the doctors when the forcefully breached the security barriers. In the video, it is evident how the young doctors hit the gate and broke it despite the imposition of CRPC 144. Furthermore, the video showcases how the doctors pushed the officials aside amid repeated attempts by the police to stop them.

Earlier, some of the viral videos exhibited that the police forced the ‘peaceful’ doctors when they were protesting. Police even then arrested 150 of them. However, the aforementioned video and pieces of evidence show otherwise.

One of the police officers, leading the security measures that day, talked to Parhlo and gave more details.

“Although CRPC 144 was imposed, police did not immobilize the protest due to the orders of the higher-ups,” said the police official on the condition of anonymity.

“The doctors were thrashing everything in their way. They breached the security barricades. A cabinet meeting was also going on and police peacefully asked the doctors to remain calm. We told them that the chief minister would talk to you after the meeting but they never listened.” 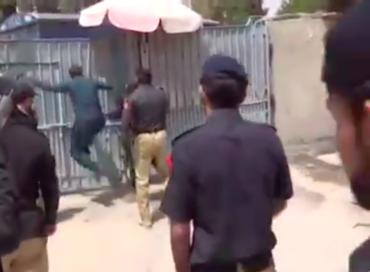 The casus belli of the indent was pushing the DSP. “One of the Deputy Superintendents of Police (DSP) was announcing on a mic to remain calm; however, a doctor came a fetched the mic from the DSP and pushed him hard.”

“After that, the police force took charge and arrested the doctors,” added the police officer.

Balochistan Chief Minister Balochistan Jam Kamal also spoke over the incident and said, “There is a lockdown, 144 in Quetta. Police and young doctors got into a situation of confrontation in three places. When they were stopped from going further, they clashed with the police.”

Let me clarify one thing

Police and law authorities are not told or are told for aggression.

There is lock down, 144 in Quetta…police and Young doctors got into a situation of confrontation at three places..where they stopped them from going further.they clashed with police! https://t.co/wHmdObgnAB

The CM further cleared his stance said, “Why would I want our front line Doctors to be affected?”

Every day supplies are given and as more we shall get we shall give….

We all know its the doctors who shall be the main force. https://t.co/yZW0vA4kzG