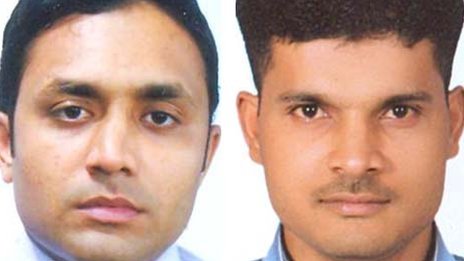 London: One step forward to the conclusion of the unsolved Murder Case Dr. Imran Farooq, Leader of Pakistani Political Party Muttahida Qaumi Movement (MQM) on the 16th of September, 2010.

Doctor Imran Farooq was among the founding member of All Pakistan Muhajir Student Organization (APMSO) the student wing of Mutthaida Quami Movement (MQM).

Dr. Farooq was murdered on the 16th of September, 2010 outside his house located in Green Lane, Edgware.

Mohsin Ali Syed and Muhammad Kashif Khan Kamran are believed to be in Pakistan currently.

Met Police said that they would like to speak to the two suspects regarding the murder of Dr. Imran Farooq.

Police knows that the suspects entered the country on student visas to seek education in a college located in the East London.

The suspect named Syed Mohsin Ali arrived to the UK in the month of February, 2010 and left on the 16th of September, 2010 the day of Dr. Farooq`s murder. Muhammad Kashif the second suspect also left UK on the same day.

Met police has identified the suspects on the basis of their followup on over 2000 phone lines while the Metropolitan Police Counter Terrorism Command detectives also reviewed over 6000 documents.

They Met police in a statement said : “Dr Farooq’s murder would have required careful planning and help from other people, some of whom may have provided assistance or information unwittingly.”

Police believes that the suspects are currently in Pakistan and have applied to the general publicÂ Â saying:

â€œWe are appealing to anyone who has not yet come forward but knew either man in Pakistan or during their time in the UK to contact the investigation team. In particular, officers are keen to piece together the men’s movements in the days immediately prior to the murder and their travel out of the UK on 16 September 2010. The two men are believed to be in Pakistan at this time and officers continue to liaise with Pakistani Authorities.â€

Anyone who wishes to remain anonymous can call Crimestoppers onÂ 0800 555111within the UK or use the Crimestoppers untraceable online form to pass on information at www.crimestoppers-uk.org.

News Coverage of the story by a Ab Tak a Pakistani News Channel in the local language of Urdu: