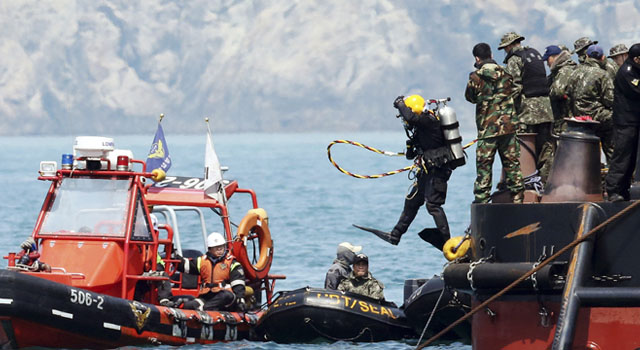 Divers have pulled 48 bodies from a single room of the sunken South Korean ferry, search officials have said.

They said on Friday that only 35 of the ferry’s 111 rooms have been searched so far, Yonhap news agency reported.

The room where they had found the bodies was designed to accommodate only 38 people. More than 180 bodies have been recovered, but 119 people are still missing.

The ferry sank April 16 on its way from Incheon port to the southern tourist island of Jeju. More than 80 percent of the 302 dead and missing are students from a single high school in Ansan, south of Seoul.

Meanwhile, the South Korean government admitted that they had misidentified some bodies, after several reports in local media said that bodies were going to the wrong families.

An “action plan” released by the government-wide emergency task force acknowledged that “there have been cases where the victims were wrongly transferred,” reported the Associated Press news agency.

Eleven crew members, including the captain, have been arrested on suspicion of negligence and abandoning people in need.

Prosecutor Yang Jung-jin of the joint investigation team said on Friday that the cause of the sinking could be due to excessive veering, improper stowage of cargo, modifications made to the ship and tidal influence. He said investigators will determine the cause by consulting with experts and simulations.

US President Barack Obama, who arrived in Seoul on Friday, presented South Korean President Park Geun-hye with an American flag that flew over the White House the day the ship sank.

His first visit to the country since Park took office last year is aimed at issues including North Korea, but he noted that his trip comes at a time of “great sorrow”.

“So many were young students with their entire lives ahead of them,” Obama said. “I can only imagine what the parents are going through at this point, the incredible heartache.”