Meet Gulzar Hussain Who Educates Children With Despite Being Disabled

Not all real heroes wear capes. There are many unsung heroes all around us who have done some act of momentary courage. Let’s talk about our very own real hero Gulzar Hussain.

The 29-year-old lad lost both his legs and an arm in a bomb last in 1999. Hussain has truly been setting new examples of resilience in the face of adversity. Losing an arm and both legs at a very young age did not make him give up. The brave guy completed his education even after the tragic incident. Not only that but he also decided to educate the children of his locality.

Hussain belongs to the Luqmankhel area in the Upper Kurram tribal district. This courageous man is a true reflection of the importance of education in our society.

In addition to this, he currently teaches the underprivileged children of his local village in a  local government primary school. His monthly remuneration is around Rs 6000 per month.

Disability never came in the way of his goals 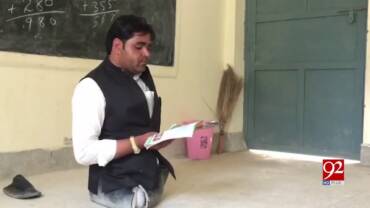 Despite the disability, Hussain never let the absence of his legs and arm stop him from achieving his goals. He never lost hope and tried to go on with his life just like every other normal child.

Although he is not receiving the scanty stipend currently. The stipend which the former political agent’s office paid has been discontinued after the merger of the tribal districts with Khyber Pakhtunkhwa.

Furthermore, one of the many praiseworthy things about Hussain is that he works hard. He received his early education by going to his school on a donkey’s back. In addition to this, he never gave up. Hussain always stood strong till completion of his master’s degree in Islamic Studies and PTC course.

Needless to say, Hussain has not only earned immense respect but also a great recognition from the people of the village whose children he has been teaching despite the many difficulties. We rarely come across such people who move forward trampling the hardships and set examples for others.

It is exceptional and truly inspiring to see people like Hussain who strive hard to make an honorable living and impart the best of gift in the form of education. Despite the challenging conditions, Hussain is undoubtedly a beacon of light who has set the bar high for living a challenging life with such honor and dignity.

We tremendously admire his courage!

Karachiites Have Found A New Mode Of Transportation After Rain Today
Sheikhupura Police Refuse To Register FIR After Torturing A Family For Hours!
To Top